Stephen Dorrell: ‘The NHS needs to be better at engaging the communities it serves’ 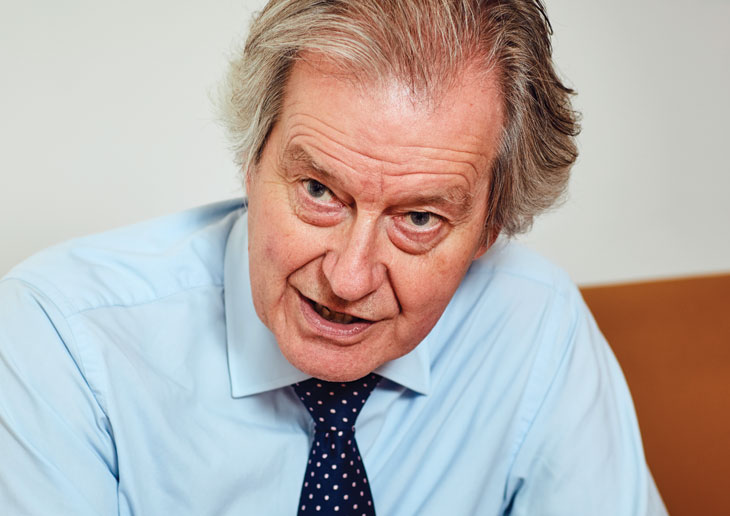 Deputy editor Angela Sharda talks to Stephen Dorrell, former health secretary and current chair of the NHS Confederation, about his time in government, his hopes for the future of the health service and what impact Brexit will have on the workforce

Stephen Dorrell has had a keen interest in politics since the age of 18, when he got involved in campaigning in the June 1970 election.

He was Secretary of State for Health from 1995 to 1997 for the then Prime Minister John Major. He was also chairman of the House of Commons Health Select Committee from 2010 to 2014, before he stepped down to take a senior position with KPMG as a health policy consultant.

‘The Confederation is uniquely placed to deliver a representative voice in the policy-making community for those who are interested in health and wellbeing and in the delivery of an up-to-date modernised version of the NHS made fit for the 21st century,’ he explains of the role, which he took in 2015.

‘I certainly couldn’t run a hospital’

Mr Dorrell was health secretary for two years and although his time in the role was brief, he describes it as a ‘fantastic job’. He took up the position in the second half of John Major’s government and admits it was no easy task.

‘When I was health secretary, I made no claim to be an expert. I certainly couldn’t treat a patient. I would have great difficulty if I was asked to run a hospital but that’s not what I was there for. The health secretary’s job is to enable people to lead longer, healthier and more fulfilling lives. The job is health secretary, not illness secretary,’ he says.

Having spent two years in the role, his perception of it is that you need a plan, a clear set of priorities and an understanding of the road that lies ahead.

‘If you [go into the health secretary’s office] and think you’re going to solve the problems of the NHS, that’s not how life is. You need to have a clear idea of the priorities at that point in time but also of where health and care policy should go in the medium and longer term,’ he says.

When asked about the choice of Matt Hancock as the new health and social care secretary, he says: ‘He has a very sharp mind and an openness to the wider pressures. He’s obviously not somebody with a deep background in health, but he is in a really interesting position because of his personal background and profile.’

Although it’s been more than two decades since Mr Dorrell was health secretary, he still has a strong interest in healthcare policy and hopes Mr Hancock will continue the work of his predecessor Jeremy Hunt.

‘I hope Matt will maintain Jeremy’s focus on patient safety. Jeremy took a personal interest in a range of issues and delivered some good things,’ he says.

Many people fear that the Tories are attempting to ‘privatise the NHS’, a view Mr Dorrell is keen to challenge. ‘Conservatives have often been wrongly accused of wanting to “privatise the NHS”. I am sure that successive Conservative governments have been right to resist pressure to move away from the NHS model of universal healthcare largely funded from taxation,’ he says.

‘I also believe, however, that both Labour and Conservative governments have been right to resist the argument that health and care services must be provided exclusively by state agencies.

Governments of all complexions have concluded that the objective of universal access to high quality services is best secured by public-sector commissioners working with a diverse and changing range of service providers. I strongly believe that those who regard high quality outcomes as the priority will continue to adopt this approach.’

‘We turn idealists into cynics’

Last winter was the worst on record for the health service, with patient demand rising and a shortage of beds in hospitals. Coming into the winter of 2018/19, Mr Dorrell highlights that the NHS needs to plan for both the long and short term.

‘We need to manage resources as effectively as we can. Any senior manager has to deal with 2018 but also needs to prepare for 2020-25,’ he says.

Mr Dorrell sees flaws in the NHS when compared with other European healthcare systems. ‘Our level of resourcing does not allow us to deliver the same outcomes as French and German citizens secure from their health and care systems.’

Alongside the winter crisis, there is the recruitment and retention crisis. ‘It’s about ensuring motivation and commitment from people,’ he says.

He values the fact that those who join the NHS do it out of commitment and a shared set of values but understands the challenges of working in the NHS. ‘I’ve often said we recruit idealists at the age of 20 and turn them into cynics by the time they’re 40,’ he says.

Mr Dorrell feels there is a need for the workforce to feel as if they are part of a team. ‘We should ensure people feel there is mutual support and a sense of pride, commitment and fulfilment,’ he says.

He identifies that those in leadership positions need to engage with current issues and demonstrate that they’re also thinking about the future.

Earlier this year, Prime Minister Theresa May announced that the NHS budget will increase by £20.5bn in real terms by 2023. Mr Dorrell believes that although this is ‘welcome and substantial’, it’s not enough.

‘The NHS is a fantastic organisation. However, it can’t be divorced from social housing, from the delivery of drug and alcohol services or community support services. The NHS needs to be better at engaging the communities it serves.’

Mr Dorrell comments that policy makers in primary care must ensure the needs of individuals who require first-line care are met reliably and effectively.

‘It means GPs working with social housing, Citizens Advice, social care and the full range of public services,’ he says. ‘The way you improve the performance of these services is by improving the flow of information between them,’ he says.

In terms of practicality, Mr Dorrell believes that primary care and GP services should be linked to the work of hospitals and local community services. ‘All local services need to be part of a single fabric with minimum disruption as you move from one to another.’

He recognises that there are factors that may disrupt this process, but says that if current processes stay in place, demand will continue to rise, which will put more pressure on stretched resources.

‘We need to identify opportunities for early intervention, to enable people to avoid preventable illness.’

‘The impact of Brexit’

With Brexit talks in full swing, it’s inevitable to ask about the impact Brexit will have on the NHS. Mr Dorrell explains that as he chairs the European Movement he has to be careful when speaking on the topic.

However, he adds: ‘I have a strong personal view that Brexit is what John Major described it as a “historic mistake”. That is my unqualified view.’

The NHS Confederation has a different outlook, one that is in line with Government policy. ‘I’ve stood back from the Confederation policy on Brexit,’ Mr Dorrell says.

‘There are issues arising from the most fundamental questions about the impact of Brexit on the wider economy and all of these will impact the healthcare sector. You can’t be 10% of the UK economy, which is what health and care is, and not be impacted by the macroeconomics of Brexit and the microeconomics of the effect on supply chains and migration,’ he says.

‘The health service is brilliant in a crisis’

Mr Dorrell maintains a strong interest in the way the NHS operates and his role as NHS Confederation chair means he is still part of the healthcare sector.

He explains that he is proud of the work of the NHS but says more needs to done to help it improve. ‘I think the health service is brilliant when there’s a crisis but it’s not good at sustaining people against the background of a rising demand for care,’ he says.

The NHS celebrated its 70th birthday this year and I was keen to find out Mr Dorrell ‘s views on whether it will survive another 70.

‘Do I think there will be an organisation called the NHS? Yes, I do. Will it be unchanged? I hope not. Society is changing, technology is changing. Change is not an event it is a way of life,’ he says.

Although Mr Dorrell’s days as a Conservative MP have come to an end, it is evident that his commitment to addressing the key issues for the health service remains very much intact.