Professor Andrew Goddard: ‘How we behave as doctors and leaders is crucial’ 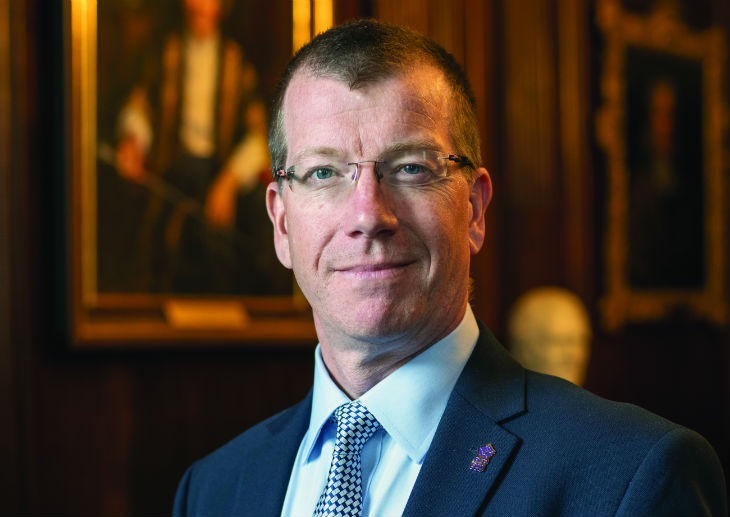 Professor Andrew Goddard, the new president of the Royal College of Physicians, explains to editor Nora Elias why the next four years are all about wellbeing, workforce and a global perspective.

My elevator pitch is the three Ws: workforce, wellbeing and worldwide,’ says Professor Andrew Goddard, president of the Royal College of Physicians (RCP) of his priorities for his four years in charge.

Taking over from Dame Jane Dacre in September, Professor Goddard has already worked with the RCP for a number of years, in roles that include being its registrar between 2014 and 2018.

I meet him just before he officially takes over as the RCP’s 121st president and he explains that his history of involvement with the college is something he is confident will help him lead the organisation.

‘I’ve been working for the college in various roles ever since I became a consultant; as an associate college tutor; on the new consultants committee; as director of the medical workforce unit; and as registrar.

‘I’ve had a lot to do with the running of the college over the last five years and although this is a significant step up, it’s not like suddenly having to speak a new language,’ he says.

That’s not to say he doesn’t see the appointment as a big responsibility, especially as the RCP celebrates its 500th anniversary this year. ‘I’m really excited and it would be naïve not to be a little daunted,’ Professor Goddard says.

‘It is to me one of the greatest jobs in the profession and a huge honour to be able to do it. I don’t underestimate the shoes I’m stepping into or those that have filled the post through the generations. However, I think I’m up to it.’

Professor Goddard, a consultant gastroenterologist at Royal Derby Hospital in Derbyshire, will continue to work at the hospital during his tenure – a first for an RCP president.

‘Jane Dacre, the outgoing president, did a clinic on a Friday but I don’t think anybody has been on call in a hospital at the weekends and doing ward rounds, so that will be different,’ he comments.

Continuing to practise is, he feels, important to his role at the RCP. ‘When it comes to talking to politicians, it’s much easier to [have a different opinion] if you can say; “you might think that but when I was in the emergency unit at three o’clock on Sunday morning it wasn’t like that”,’ he explains.

Professor Goddard adds that ‘the issues that concern hospital doctors have a lot to do with the pressures of working in a busy NHS; the bureaucracy, the IT problems, the culture of blame.’ He will still be experiencing this reality and he believes this will give him credibility.

‘It also allows me to speak from the heart about these issues, which I think is important,’ he says. As to his key priorities, the three Ws, he says there is a pressing need to increase the number of people entering medical school.

‘We’re asking for a doubling of medical students because most of the problems we’re seeing in the NHS are related to inadequate numbers of staff and the evidence is that we need to double the medical students in order to have the right number of people – consultants and GPs – in 12 years’ time,’ he says.

However, Professor Goddard adds that training and recruiting more medical staff will serve little purpose if the NHS is not able to address one of the key workforce challenges – retention.

‘To err is human and we make mistakes’

This is where the wellbeing factor becomes significant, with Professor Goddard emphasising the importance of looking after doctors’ physical and psychological welfare.

‘If you double the number of medical students but they all leave because of burnout and the working culture within the NHS [you’ll still be in the same position],’ he says.

‘We’ve got to ensure that we retain the workforce – and culture is crucial to that. Why does anybody stay in a job? They stay because they enjoy it and if you create a culture where people don’t enjoy their jobs, they won’t stay.

‘Why have lots of GPs retired early? Why are consultants now beginning to retire early? It’s the culture. When you talk to doctors about medicine and being with patients, they love it: it’s the system that’s the problem,’ Professor Goddard says.

One of those issues is, he adds, the culture of blame within the NHS – something he’s far from alone in identifying. ‘As doctors we work in a high-risk environment, which means you will [at times] make decisions that in retrospect those turn out to be wrong.

‘That is the nature of medicine. To err is human and we make mistakes – what is important is how you manage those risks within a healthcare system and how you manage things when something goes wrong.’

The common current approach, of looking for someone to blame and disregarding contributing factors such as the heavy workload physicians are under is, he says, highly detrimental both to doctors and the NHS.

‘We’re taking a situation that is already high pressure and high risk and saying that if you make a mistake you could go to prison,’ he says.

‘We can’t do that. You can see that the juniors are burnt out and many feel that they don’t want to do medicine any more. If we don’t do something about this pretty quickly, we’re going to run into problems.’

‘Beware the shadow you cast’

An essential part of protecting the wellbeing of the NHS workforce is ensuring there is great leadership, and Professor Goddard is also aware of the importance of good leadership to his role as RCP president. ‘I would like to think that I’m collaborative and communicative,’ he says when asked how he would describe his approach as a leader.

‘I’ve run bowel cancer screening in Derbyshire for 12 years and I’ve been a consultant for 17 years, so I’m used to leading teams and most people say I’m pretty open. I firmly believe you have to talk to people and not hide behind emails, and that you have to be responsible for your actions.’

In some ways, he says, leading well is fairly straightforward. ‘On the desk in my office in Derby I have a piece of art that says “work hard and be nice to people”, and to me that’s what you need to do in medicine. Most of the time, people will respect you if they see that you’re honest and that you go about things in the right way.’

However, he adds, you also have to put the time in when it comes to building relationships and creating a strong and committed team. ‘You need to spend time with people to have an effective team because if you don’t know them and they don’t know you then you can’t trust each other.

The significance of this in a medical environment is an issue Professor Goddard has been championing for some time, and he explains that he will continue to do so.

‘The loss of the medical team and how we build up their ethos is quite a big thing of mine. All the evidence is there about teams – that spending time with them and understanding their needs is central to making people happy at work.’

As a leader it is, he says, essential to consider how your attitude and behaviour affect the people around you. ‘The biggest lesson I ever had was from someone who told me to “beware the shadow I cast”. I believe that medicine is brilliant but how we behave as doctors and leaders is crucial to delivering that.’

The impact of Brexit is potentially going to be damaging’

The third W, worldwide, is closely linked to workforce and to the inescapable B-word: Brexit. ‘I think the impact of Brexit – which is obviously going to happen on my watch – on workforce, research and medicines is potentially going to be damaging, so we have to make sure there are safeguards in place,’ he says.

‘Historically, the NHS has been very reliant on people coming in from other parts of the world and even if we double the number of medical students, it’s going to take 12 years to reach that point. We’ve got to find a workforce in the intermediate, and the only place that is going to come from is internationally.’

With the negative impact Brexit seems likely to have on EU staff’s ability and willingness to work in the UK, Professor Goddard believes it’s more important than ever to make it easier for doctors and othermedical staff from beyond Europe to come over.

‘We used to have fantastic relationships with Australia, India, New Zealand and Canada and a free exchange of medical skills and knowledge,’ he says. ‘The current hostile environment with immigration policies is really stopping that. We need to get back to it.’

Another priority, he adds, is closer integration between primary and secondary care, which is high on the NHS agenda but remains a work in progress.

‘Hospital care and GPs have become increasingly siloed and most commentators, including this college, would agree that we need to get rid of those boundaries; that patient care should be delivered as close to home as possible and that we need a far more integrated approach – but we need to look at the model we want,’ he says.

He sums up with a plea to look beyond political agendas. ‘One of the big criticisms of the NHS is that it goes in political cycles, with everyone working towards the next election. Until we have an idea of what kind of NHS we’re trying to build and how that is going to be funded, we’re not going to get very far.’