How we help teens talk about mental health 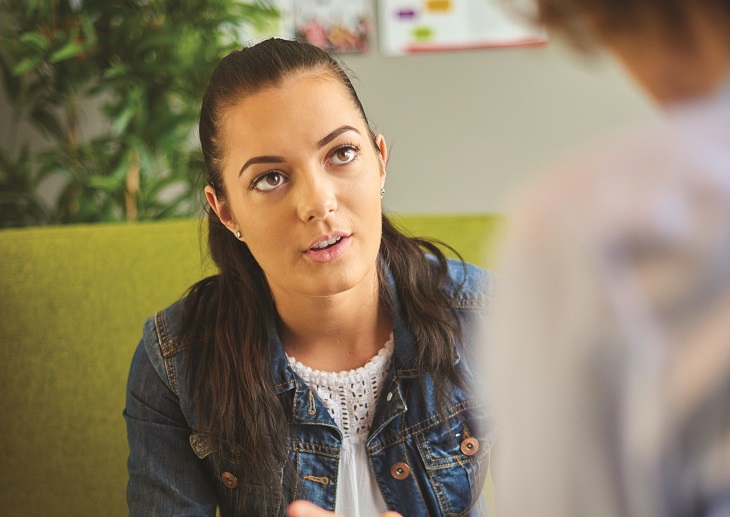 The MindSpace programme in Barnsley is using Future in Mind funding to help teenagers in school with mental health issues. Radhika Holmström reports

‘I managed a pupil referral unit for students up to 16 years old, and I found the profile for young people at risk of exclusion was changing, with a lot of mental health difficulties,’ says Michelle Sault, now head of extended services at Wellspring Academy Trust in Barnsley, South Yorkshire. ‘One of the things that stuck with me was one 14 year old who’d been bereaved. He was an intelligent young man but his behaviour deteriorated and he ended up with us. I strongly believe if there had been something like MindSpace in his school, he wouldn’t have been taken out.’

The crisis in children and adolescent mental health services (CAMHS) is all too well-recognised. According to the charity YoungMinds, one in four children and young people shows some level of mental ill health, and half of all mental health problems have manifested in some way by the age of 14.

However, a vast proportion are not getting access to the support they need. A 2016 report for the Children’s Commissioner found that ‘large numbers’ of children and young people are put on long waiting lists, fall through the system because they miss appointments and then have to start on the list again, or are turned away in the first place.Plus, a number of children and young people do not qualify for the support that is on offer.

The situation is, if anything, even more acute in Barnsley. It is recognised as an area of considerable deprivation,with predictable knock-on effects for mental health. One report in 2015 of Year 9 school students (aged 13 to 14 years old) found that 24% said they were depressed most days and 29% had harmed themselves because of stress or anxiety.

Patrick Otway, mental health commissioner at Barnsley clinical commissioning group (CCG), says he and his colleagues have been aware of this problem for years. ‘Around 2014 we started looking at what we could do to improve children and young people’s well-being,’ Mr Otway says.

‘Not only was CAMHS being overloaded with referrals, many of those referrals weren’t appropriate. We put a business case together, and it was agreed in principle – but there was no funding.’

In March 2015, the then-health minister, Norman Lamb MP, launched ‘Future in mind: promoting, protecting and improving our children and young people’s mental health and wellbeing’ report, the work of the children and young people’s mental health taskforce, and the Government committed to spending an extra £1.25bn on CAMHS funding over the next five years.

Barnsley is using the funding in different ways, but a substantial proportion – £1.3m– is going to the MindSpace programme, which is being delivered across all ten local mainstream secondary schools by Ms Sault’s Wellspring Academy Trust(although the schools themselves are not part of that trust).

The programme operated from 2016 under its original name ‘4:thought’ but was relaunched last October as MindSpace.

Young people or their parents can now refer themselves directly, in addition to referrals from schools and GPs. The team also offers Year 10 pupils (aged 14 to 15) the opportunity to become mental health ‘ambassadors’ which involves training by the emotional support worker in conjunction with the charity CHILYPEP (The Children and Young People’s Empowerment Project), which has played a major role in getting MindSpace established.

Some of the family work is also in the home. In fact, Mr Otway says, the parent element has been surprisingly successful.

‘We thought about the whole family, but we didn’t think parents would be so forthcoming. We’ve had nearly 100 by now, including parents who have accessed the service but whose children aren’t in touch with it.’

‘The CCG funds the MindSpace team and I drive everything else forward,’ Ms Sault explains. ‘Schools have to provide the room and the facility appropriate for early intervention.’

Everyone involved pays tribute to Ms Sault’s energy and commitment in getting the project up, running and continuing.

From the beginning, MindSpace also met with whole-hearted support from Mr Otway and his colleague Brigid Reid, chief nurse at the CCG.

‘When we saw their proposal it was exactly what we were looking for,’ Mr Otway says. ‘The key thing for the CCG is that we wanted something schools-led. We felt that was the key. They know their children best, and the students need somewhere where they feel safe and can talk in a non-clinical environment.’

What has made the project work, he feels, is the combination of Ms Sault’s passion and vision; the buy-in from the young people (in this case from CHILYPEP); and its links into the existing structures.

‘The key is between the project, CAMHS and the young people. I got them together but obviously they also meet independently.’

‘In our first year, 68% of those who used the service were girls, and now it’s split evenly. We are so pleased that more boys are talking about their feelings and supporting getting things in place,’ Ms Sault says.

‘It seems to take only around six weeks before you notice a change in the young people involved,’ Mr Otway adds.

What about the results? Ms Sault says: ‘Since we started in November 2016we’ve had over 400 young people. We’re working on gathering the data so that after18 months we can look at the results for commissioners.

‘But we know from schools and from young people they’re not out of lessons as much as they used to be, they’re not struggling with their anxieties, and they’re managing their anxieties much better –schools have seen the results in a huge number of ways.’

The Future in Mind funding continues until 2020. Locally, Ms Sault is looking at ways MindSpace can be extended. There is interest from other academy trusts but Ms Sault is clear that it’s a copyrighted brand and that anyone who wants to replicate it will have to come through her and her colleagues. ‘I wouldn’t want the name to be out there and not as rigorous and carefully managed.’

‘You could kickstart a similar project elsewhere but you’d have to have young people’s input if you really want to make it work, via an organisation that knows how to consult with them,’ Mr Otway says.

‘And commissioners have to be open to listening to children and young people, because it’s easy to hear them but not really take them on board. ‘It’s been a tough year, Ms Sault adds.

‘Getting these services up and embedded into the school system has had its difficulties. I’ve had sleepless nights about getting it right for these young people. But I feel humbled and proud of what we have achieved.’