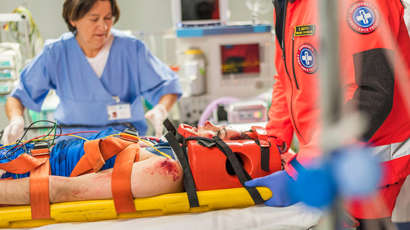 Niall Dickson, chief executive of the NHS Confederation, said that ‘preliminary figures are indicating that services are already under a huge amount of strain, without a flu outbreak and cold weather’.

He said: ‘The ambulance sector is under real pressure with continuing rising emergency activity and delays at some hospitals.

‘Like everyone else, they are just-about-coping, but that’s largely thanks to the fact we are better prepared for winter than ever before.

‘Only by focusing more on out-of-hospital care can we even begin to reduce the demand on the hospitals which are now at bursting at the seams.

With a weather warning issued for this weekend (8-10 December) ‘things are likely to get worse’, said Mr Dickson.

Commenting on the data, British Medical Association (BMA) council chair Dr Chaand Nagpaul, said: ‘The extra cash promised in the budget for the NHS this winter may alleviate some short term pressure but will not address the long term needs of the NHS and it’s a sticking plaster solution.

‘NHS staff in our GP surgeries and hospitals are working flat out to treat patients quickly and efficiently, but they are under unsustainable pressure.

‘Addressing these pressures requires immediate additional capacity in the system but also a long term plan from government to ensure the NHS is properly funded to deal with rising demand.’

In July 2017, NHS Improvement sent a letter to local A&E delivery board chair, saying that ‘delayed transfer of cares (DTOCs) remain a significant barrier to improving patient care on emergency care patways and performance against the four hour standard.

It said: ‘Reducing delays must, however, be a shared endeavour. CCGs, Community Trusts, Mental Health Trusts and Acute Trusts will need to work together to deliver the NHS’s half of this ambition.’

But the British Medical Association (BMA) warned that three million patients would wait to be seen in A&E departments until September 2018.