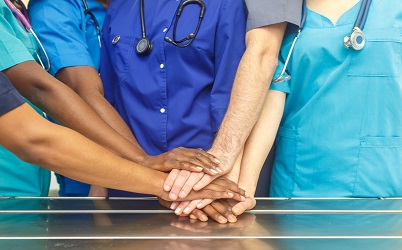 The NHS workforce grew by almost 20,000 over the past year, including a 5.8% rise in the number of managers within the organisation.

The workforce across the whole of the NHS grew by 1.6%, figures released by NHS Digital have revealed.

The number of people working in NHS trusts and CCGs increased by 16,604 full time equivalent (FTE) staff, also representing a 1.6% rise, between March 2017 and March 2018.

There was also a rise in the NHS management level in the period examined, with a 5.8% increase in managers across the organisations, as the FTE of 1,217 came on board.

The number of senior managers within the NHS was up by 2.6%, representing 258 FTE staff. However, the number of GPs, nurses and health visitors all declined between March 2017 and March 2018.

A Department of Health and Social Care (DHSC) spokesperson noted that the change in the number of doctors and nurses throughout the year is linked to ‘recruitment and training cycles’, meaning it often increases in the late summer and mid-winter.

The spokesperson said: ‘Dedicated NHS staff work tirelessly to make sure patients get excellent, safe care and we are supporting them by training 25% more doctors, nurses and midwives, giving a significant pay rise to over a million staff, and listening to the issues that matter to them.’