Revealed: more than 88% of CCGs have one practice in Time for Care programme 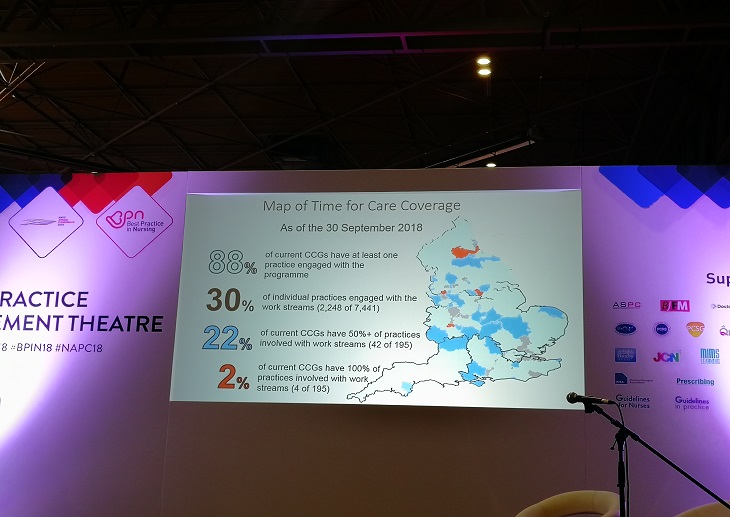 Over 88% of CCGs have at least one practice engaged with NHS England’s Time for Care programme, NHS England has said.

Speaking at the Best Practice show in Birmingham yesterday, Time for Care programme lead Rachel Hinde said 172 of the 195 CCGs in England have at least one of their practices enrolled in the programme.

The figures, which are representative of the programme’s uptake as of 30 September 2018, also show that of 7,441 practices in England, 2,416 are engaged with the work streams.

Around 42 CCGs have 50% of practices or more involved in the programme, while only four CCGs registered a 100% programme uptake among their practices.

The Time for Care programme

Introduced as part of the General Practice Forward View (GPFV), the programme suggests a series of measures that practices can adopt to release capacity, such as cutting DNAs, or offering phone or online consultations.

A £30m fund was allocated to CCGs to implement the programme – which is set to run until the end of March 2019 – of which £8m was spent in the first year.

As stated in the 2018/19 updated plans for the NHS, NHS England and NHS Improvement are expecting every practice to implement at least two of the ’10 high impact actions’ by the end of the financial year.

The impact of the programme

Ms Hinde said: ‘We can show that as a result of working with us, 58% of practices feel they are collaborating more with other organisations within their local area.

‘We are having an increasing [number] of people working in practices – GPs, managers, all sorts of people – who are saying “I was going to give up but now I am not going to”.’

Ms Hinde specified that her team helps ‘practices make changes for themselves’ instead of doing it for them and that the clinical and admin time practices have managed to release is their own merit.

Last week, our sister publication Pulse reported that the Time for Care programme has saved 192,000 hours of admin time and 121,000 hours of clinical time.

However, new figures on the number of hours the programme has saved so far, presented at the Best Practice show yesterday, showed that a whopping 295,897 hours of admin time has now been saved, and as many as 176,808 hours of clinical time.