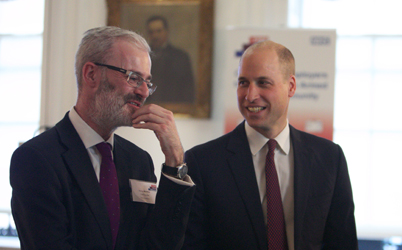 Prince William has launched a nationwide scheme to help military veterans and their families to work in the NHS.

Around 50 health trusts have signed up for the scheme to help veterans, their spouse and dependents in their career transition.

Prince William has launched a nationwide scheme to help military veterans and their families to work in the NHS.

Around 50 health trusts have signed up for the scheme to help veterans, their spouse and dependents in their career transition.

The scheme, Step Into Health, led by NHS Employers and supported by the Prince’s charity, The Royal Foundation, was created in 2014 by Norfolk and Norwich University Hospitals (NNUH) NHS Foundation Trust and the charity Walking with the Wounded, which supports vulnerable veterans.

Speaking at an event in London yesterday (18 January), His Royal Highness The Duke of Cambridge, said that ‘the NHS has been the perfect partner in this endeavour’.

He said: ‘Many of the values the NHS espouses are well understood and widely practiced within the Armed Forces: close teamwork, commitment, compassion, respect, dignity and professionalism.

‘Likewise, the skills and experience that veterans can offer employers are highly sought after and valued within the NHS.

‘By that I mean, for example, an ability to operate under pressure, courage in the face of adversity, leadership and management together with, above all, a strong and unwavering sense of public duty.’

With more than 350 different available career opportunities, the NHS is the largest European employer.

Given the current pressure it is faced with, the health service recognises ‘the transferable skills and cultural values that Armed Forces personnel develop when serving’.

Danny Mortimer, chief executive of NHS Employers, said:‘We’re absolutely delighted that His Royal Highness is such a huge supporter of this scheme and would like to thank him for taking the time to meet the people who have worked so hard on the project and who have benefited from this work.

‘Step Into Health is recognition that the nation’s largest employer, the NHS, can benefit from the talent and dedication of Armed Forces personnel and their families.’

Until now, the programme has helped personnel from across all ranks and branches of the military, ranging from combat infantry soldiers to Royal Navy Commodores.