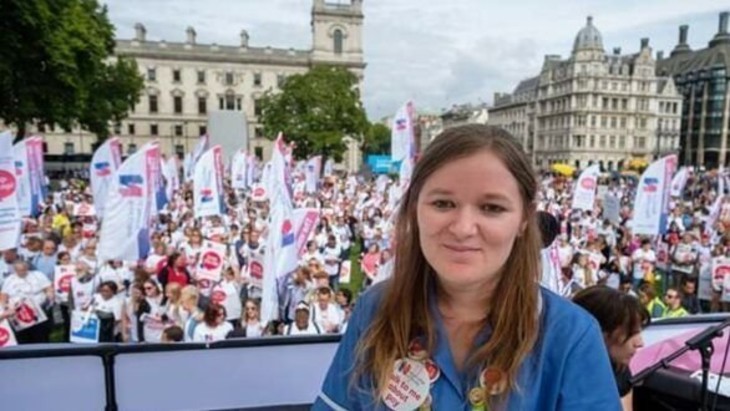 A nurse has started a petition calling on the prime minister Boris Johnson to honour his pledge for 50,000 more nurses, warning that ‘the situation is critical’.

London staff nurse Danielle Tiplady, a prominent campaigning voice in nursing and Labour Party supporter, promised to hold Mr Johnson to account in a petition signed by over 100,000 people since it went live last month.

In the online petition, Ms Tiplady demanded that the Government release a ‘full plan’ for recruiting and supporting registered nurse, and to specify when the pledge would be fulfilled.

She added that the nursing shortage is ‘desperate and dangerous’ as the latest figures show there are over 43,000 nursing vacancies in the NHS in England alone.

She wrote: ‘I have seen first hand how our NHS is on its knees – and how we desperately need more registered nurses in order to meet demand so that we can safely care for patients.’

Speaking to our sister publication Nursing in Practice, Ms Tiplady said: ‘Boris made a bold promise and I want to hold him to account to make sure he sticks to it because nurses and patients deserve better than how things are now.’

She said she is ‘overwhelmed’ at the how fast the number of signatories on the petition is growing and intends on delivering it to the prime minister.

‘People far and wide are supporting it – nurses, other NHS staff and the public,’ she added.

The Conservative manifesto pledge for 50,000 more nurses was criticised in November last year after it emerged that the figure includes 18,500 existing and returning nurses.

The party has confirmed these nurses would either be retained through measures such as ‘enhancing’ continuing professional development training or recruited through return-to-practice schemes.

The figure is further made up by training 14,000 undergraduate and postgraduate nurses, 5,000 apprentices and 12,500 nurses recruited from abroad through an international recruitment drive, all of which is to be supported by an extra £725 million of funding annually.

Ms Tiplady was previously a leading voice calling on the Government to reverse its decision to axe the student bursary by launching the ‘Bursary or Bust’ campaign as a student nurse.

She also launched a petition as part of the ‘Scrap the Cap’ campaign to end the 1% limit on nurse pay rises, precipitating parliament to debate the issue in 2017.

A spokesperson for the Department of Health and Social Care said the Government would ensure the NHS has 50,000 more nurses by 2025.

They continued: ‘To help secure the people we need for the future, we have confirmed all nursing and midwifery students on courses from this September will receive at least £5,000 a year – for free – to support their studies.

‘The upcoming NHS People Plan will set out further actions to boost recruitment and retention.’

Last month, the Government that living costs for student nurses would be available from September 2020.