Into the heart of the community 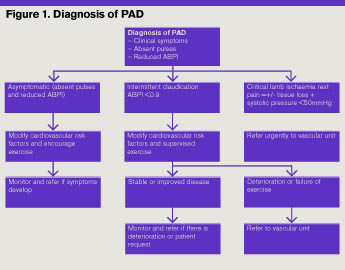 Oldham’s PAD clinic was shortlisted at the General Practice Awards 2015, here is how and why the programme was brought into primary care

Oldham’s PAD clinic was shortlisted at the General Practice Awards 2015, here is how and why the programme was brought into primary care

The term peripheral arterial disease (PAD) is an atherosclerotic process that causes stenosis and occlusion of the arteries supplying the lower limbs below the level of the renal arteries. It does not include coronary and intracranial vessels. It is frequently under diagnosed and often subject to suboptimal care.
PAD is extremely common and has an estimated worldwide prevalence of almost 10% of the population, increasing to 15-20% in people above 70 years of age.1,2
PAD is a strong indicator of cardiovascular risk. People with PAD have the highest three-year event rate of myocardial infarction/stroke/death/hospitalisation (40.4%).³
Critical limb ischaemia (CLI) is the most severe manifestation of PAD and can lead to amputation of the leg or even death if not treated urgently. For every hundred patients diagnosed with symptomatic PAD, approximately one to two new patients a year will develop CLI. Every year, approximately 500-1,000 new cases of CLI are diagnosed with an estimated cost to the NHS of more than £200 million per year.4
Factors that contribute to PAD:

PAD increases the risk of a cardiovascular event, early diagnosis and early treatment can address risks and avoid future amputations. Oldham Public Health Annual Report 2012-13, showed a predicted increase of Oldham’s older population over the next 10 years.5 Although Oldham has witnessed an increase in life expectancy over recent years, it is still ranked the 19th worst (out of 324 authorities in England) for female expectancy and 16th worse for males. Coronary heart disease makes up 68% of male deaths and 51% of female deaths. In 2010/11 strokes in Oldham accounted for 106.0 per 100,000 emergency admissions. Strokes also contributes to 16% of male deaths and 28% of female deaths in Oldham. Twenty four per cent of the Oldham population smokes and 25% is obese as per 2012-13 report. Worryingly the evidence suggested that unless improvements were made locally in diagnosis, effective management and treatment of patients with PAD, targets to reduce cardiovascular mortality and morbidity in Oldham will be difficult to achieve.
Oldham had no PAD screening or diagnostic service in the community, and development of the community PAD service had the backing of Oldham Public health Charter, which empowers individuals and communities, evidence and effectiveness and working together. It also fitted in with triple aim vascular objectives of Oldham Clinical Commissioning Group (CCG) – to improve the vascular health of Oldham’s population; to improve the vascular care they receive and their experience of it and to provide not only a cost effective but also evidenced based management to all patients with vascular pathology. Avoidance of leg amputation could lead to cost savings of around £32,000 per person in the first year of care.
Aims and objectives of the service:


Service description/pathway
In Oldham, Pennine Care Foundation Trust Tissue Viability Service, undertakes vascular assessment of the lower limbs for patients who have or have had venous ulceration but patients with arterial signs and symptoms were referred to the hospital. It was agreed that a full holistic assessment of the patients with symptoms suggestive of PAD including cardiovascular risk assessment as evidenced by The National Institute for Health and Care Excellence (NICE) will be provided by the tissue viability team. The service will be required to promote self-care agenda: adopting a healthy life style to influence patients’ behaviour and work collaboratively with specialities and other service providers and professionals.

Referral proforma
The referral proforma was designed with the help of local vascular consultant. The proforma had inclusion and exclusion criteria, with brief clinical history, examination findings, a list of current medications and investigations: cholesterol, HBA1c, full blood count, urea and electrolyte.

Treatment and referral pathway
General examination, limb inspection, examination of the limb, ankle brachial pressure index (ABPI) was undertaken in the clinic (Figure 1). Diagnosis of PAD was made based on a triad of positive history, absent pulses and reduced ABPI. Intermittent claudication is characterised by cramp like pains in legs precipitated by walking and rapidly reduced by rest, only to return on resumption of walking
(Figure 1). Critical limb ischaemia is a severe manifestation of PAD and must
be referred urgently to vascular unit (Figure 1).

ABPI
Ratio of ankle to brachial pressure index is called ABPI (Table 1). It is 95% sensitive and 100% specific. It has its limitations in diabetic patients, patients with end stage renal disease, and heavy smokers because calcified arteries can give a false high reading of ABPI.

The clinic operated from two sites, two days a week. There were:

Cost and efficiencies
The cost of a PAD clinic at a hospital for eight months comes to:

Oldham CCG has given permission for the graphs to be reproduced.