HSCIC: A day in the life (part one) 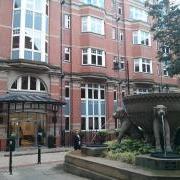 What does HSCIC actually do? In the first part of her blog series, The Commissioning Review's senior reporter Lalah-Simone Springer hopped on a train up to Leeds to find out

I must admit, when I first arranged to spend a day at the Health and Social Care Information Centre (HSCIC) I was picturing a massive Google-esque data centre with an underground trove of blinking computer stacks, sucking all the information out of general practices and hospitals and whirring them out on reams of paper, like overgrown maniacal fax machines.

What does HSCIC actually do? In the first part of her blog series, The Commissioning Review's senior reporter Lalah-Simone Springer hopped on a train up to Leeds to find out

I must admit, when I first arranged to spend a day at the Health and Social Care Information Centre (HSCIC) I was picturing a massive Google-esque data centre with an underground trove of blinking computer stacks, sucking all the information out of general practices and hospitals and whirring them out on reams of paper, like overgrown maniacal fax machines.

Instead, I was greeted by a pleasant blonde-bobbed woman and made to sit down in a slightly stuffy reception room.

Formed by the Health and Social Care Act in April 2013, HSCIC is the body responsible for:

But what does that mean in practice?

It means that across four floors of an office building in Leeds, maths-brains (statisticians) are looking at lots and lots of data, attempting to make sense of them – but not comment on causation – in the hopes that politicians, commissioners and people on the front line will use it to improve care for people across the UK.

I was handed a timetable. It was a bit scary. Browsing down the list of interviews with statisticians responsible for the clinical commissioning group outcomes indicator set (CCGOIS), the national audits, hospital episode statistics, population health and others I wondered – not for the first time – why on earth my editor had agreed to this idea when I'd pitched it.

As I squeezed myself behind a small table next to Alison Roe (service delivery manager for CCGOIS) with recorder, notebook and coffee cup in hand, Chris Dew (who looks after the NHS Outcomes Framework) scooted over on a wheely chair.

The first thing I learned was that the cool kids don't pronounce it CCG O-I-S. They call it CCG Oi-s. Based on National Institute for Health and Care Excellence (NICE) quality standards, the indicator set provides a way for clinical commissioning groups to see if they are delivering good care.

The NHS Outcomes Framework is similar, but with a different purpose. It's used, more generally, to look at how the NHS as a whole is performing at a national level. It's the way that Jeremy Hunt, Health Secretary, holds NHS England to account for delivery of care. But NHS England are the ones who tell HSCIC what information to measure.

Although the CCGOIS isn't used for CCG payment, a couple of the indicators are used for the quality premium – a payment from NHS England for improving health outcomes and reducing inequalities. Instead, the indicator set can be used by CCGs and health and wellbeing boards to set local ambitions.

Alison says: "Maybe a CCG needs to improve the services for diabetic patients, or stroke patients. This is really how the indicators are intended to be used. What we're doing is making sure that the methods are robust so that CCGs can compare themselves to their neighbours. 'Why do we have far higher rates of readmissions?' They want to understand that. Maybe [the CCG] would need to increase the services they're commissioning, or adjust the type of services.

"It may not be the complete answer, but maybe the CCGOIS can give them a starting point, some things to open up the discussion, and then dig into more locally."

And the NHS Outcomes Framework can also be used to dig into the quality of care on a provider level, meaning a higher level of scrutiny if care isn't up to par.

Issue is, not many CCGs are using it. Or, if they are, they're not feeding back to HSCIC about it.

Hesitantly, Alison says: "Maybe a lot of people just don't know about it yet… I guess CCGs have had so many things to be worried about, just getting up and running.

"Even so, because of the nature of a lot of these indicators that we've been asked to produce, it's only now getting to a point where there are lots of indicators out there. This is something we can build, and people will find more useful things on there as they become available."

The Francis report into the massive failings of care revealed at Mid Staffordshire NHS foundation trust imbued the Health and Social Care Information Centre with a renewed sense of purpose, just as it did with many other parts of the health service.

At that point, different organisations were using lots of different ways to measure mortality rates – meaning there it was incredibly difficult to compare one trust to another.

Chris says: "One of the recommendations [from the report] was to develop a new mortality indicator, which is the Summary Hospital Level Mortality Indicator that we do, but also have clearer governance of indicators. There was a need for more transparency on what people are using to hold hospitals to account so people can have more faith in what's being done."

Transparency, efficiency, usefulness were the mantras of the day – repeated in every encounter with every statistician on every colour-coded floor. Next week, I'll introduce you to the HSCIC National Audit team. I promise, you'll love it.

Did you enjoy Day in the Life? The Commissioning Review is looking for new organisations to unleash Lalah upon. Email [email protected] with your suggestions.