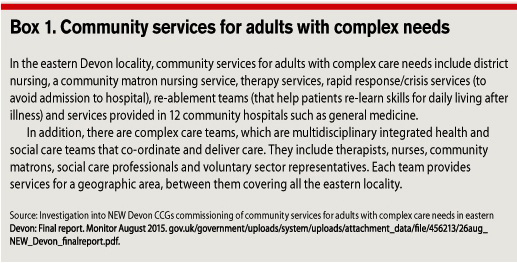 Putting a contract up for tender has been the way the NHS does business. Devon attempted to break the mould, Monitor was called and made a landmark ruling which will embolden commissioners

When North, East and West Devon Clinical Commissioning Group (NEW Devon CCG) decided to review its preferred provider for community services for adults with complex needs, could it have predicted the brouhaha that was to follow?

Putting a contract up for tender has been the way the NHS does business. Devon attempted to break the mould, Monitor was called and made a landmark ruling which will embolden commissioners

When North, East and West Devon Clinical Commissioning Group (NEW Devon CCG) decided to review its preferred provider for community services for adults with complex needs, could it have predicted the brouhaha that was to follow?

At stake was a £100 million community services contract covering services such as bowel, bladder and heart failure for adults with complex needs. They included most of the district nursing services as well as occupational therapy, community hospital and some inpatient beds needed by this patient group (see Box 1).

The CCG had begun a programme to transform community services in May 2013 and services for adults with complex care needs was one of four work streams. NEW Devon CCG was aiming for a ‘co-production’ in its commissioning with the views of local people and local stakeholders very much part of the process. They said they wanted an integrated approach with care provided closer to their homes.

It was out of this consultative exercise that NEW Devon CCG drew up plans to commission community services for adults with complex care needs in the eastern locality from Royal Devon and Exeter NHS Foundation Trust; from Northern Devon Healthcare trust in northern Devon; and from Plymouth Community Healthcare in western Devon.

Another round of consultation in 2014 drew support locally; NEW Devon CCG announced it would not be inviting providers to compete for contracts. If the preferred bidders were confirmed, a process of due diligence to assure value for money would follow.

Not everyone was happy though. Northern Devon Healthcare felt it had been treated unfairly and it objected locally. When that produced no change in the plans, the trust formally complained to Monitor that NEW Devon’s process contravened procurement, patient choice and competition rules. In January 2015 an investigation was launched. When that investigation reported in August 2015 it found in NEW Devon’s favour.

The regulator said the process used by NEW Devon to choose Royal Devon and Exeter Foundation Trust “was proportionate and enabled it to select a provider from the available options”. There was no breach of the procurement, patient choice and competition regulations.

However, Monitor warned the CCG needed to “do more work to ensure that it will get value for money before awarding the contract”.

Many see this ruling as crucial. Julie Das-Thompson, head of policy at NHS Clinical Commissioners sums up: “It is a significant example for CCGs because this demonstrates a CCG working with the rules and acting in the best interests of patients and trying to meet the ambitions as laid out by the Five Year Forward View.

“They [Monitor] have always said that as long as a CCG makes a clear case for what it is trying to achieve for its population through integration then the rules need to support it.”

Stating NEW Devon’s case
So what was the process? And how was NEW Devon able to demonstrate it stood up to Monitor’s rules?

NEW Devon CCG received a clean bill of health on all four of these. It had developed proposals for change on the back of wide consultation, appraised the options, invited interested parties to respond and evaluated their responses against agreed criteria and using an independent panel.

Dr David Jenner, chair of the Eastern Locality for NEW Devon CCG, agrees that this is an important ruling for all CCGs.

Although this work started ahead of the publication of NHS England’s Five Year Forward View, it has implications for any CCG wanting to move ahead with the integrated care vision.

He says: “It [Monitor’s ruling] means that, given the right process, CCGs can commission integrated services without the need for a full competitive tender. I think it is a vitally important test for the NHS, particularly in view of the Five Year Forward View. It means that if you can demonstrate that integrated services are in the best interests of patients, there is not necessarily a need for a full competitive tender, but you will still have to demonstrate value for money. That is the bit we have not yet done and it is possible that that will not be done to the mutual satisfaction of both the commissioner and provider and we will still have to revert to another procurement approach.” He is hopeful this won’t be the case and that the CCG and Royal Devon and Exeter Foundation Trust will show value for money.

Moving on
Officially, everything in Devon is now peace and light. In a joint statement issued in August, Northern Devon Healthcare Trust, NEW Devon CCG and Royal Devon and Exeter FT pledged to “work together to demonstrate this procurement represents value for money to the taxpayer through a due diligence process”.

Rebecca Harriott, NEW Devon’s chief officer, said the CCG would press ahead with “pre-planned work to ensure value for money”, before awarding the contract in November and starting work with the new provider in March 2016.

James Brent, Royal Devon’s chair, said the ruling would result in “much closer integration of acute and community services in east Devon to the benefit of our patients and communities”.

Northern Devon chair Roger French said the trust accepted the findings “entirely”, adding: “We are really pleased that the outcome of the Monitor report means there is now clear guidance as to what now needs to happen to ensure a robust way forward.”

CCGs taking charge
It is not just CCGs that have had a watchful eye on this ruling. Julie Das-Thompson, head of policy and delivery at NHS Clinical Commissioners, says there are also clear implications for provider organisations too.

“It is a signal that CCGs are willing to act in their populations’ best interests with a strong objective to integrate services,” she says. “This is a CCG that has tested the rules, tried to do what’s best for patients and shown that the rules can support them to achieve it. I think providers will need to learn from this example as much as the commissioning sector.”

It also backs up what NHS Clinical Commissioners has been saying for some time now; it’s up to CCGs to shape the rules and regulations. In its October 2013 briefing, The Rules are Not Your Enemy, NHSCC stated: “Far from allowing the uncertainty and confusion around the precise operation of procurement and competition rules to inhibit progress, CCGs have the space to collectively take responsibility for shaping how those rules are interpreted and operated.”

The more that CCGs take a robust approach in shaping the way rules are implemented, it said, “the more the application of the new regulations will be shaped by patient need. Ministers, regulators and providers inside and outside the NHS will find it difficult to criticise or legally challenge a decision demonstrably taken in the interests of local people. CCGs need to assert that this is the right approach”.

This is now being proved right, says Das-Thompson. “We have previously said that procurement should be enabling – what CCGs need are different types of procurement levers in order to commission effectively.

“In one case it might be a competitive tender. In another, a CCG might want to go down a single tender route or roll over a contract. The regulators must be supporting CCGs to navigate the rules as much as providing guidance on what the rules are.”

But within this ruling there are very clear lessons for CCGs, she adds. Simply asserting that plans are good for patients won’t cut the mustard. There needs to be a robust process and demonstrable rationale too.

Das-Thompson says: “What will be interesting is how CCGs learn from this. NEW Devon had a very clear rationale for doing what it did. It had set out its strategic aims and followed them through. What Monitor seems to be saying is that as long as you have a clear argument as to why you are taking these steps then the rules will support you. It is a helpful message both nationally and locally.”

Options at hand
If this ruling does make clear that the “preferred provider” route is an acceptable alternative to open competition, it does not help CCGs consider when one approach might be used over the other. NEW Devon is using both – it has plans for a competitive tender for urgent care, for example.

Mike Sobanja, former chief executive of the NHS Alliance, says each has its place. “I think it is very early days for CCGs who are trying to find their way in a particularly confusing marketplace.”

“Some places have been doing a lot of competitive tendering and see it as a way of challenging the existing provider as well as selecting the right provider. It is labour intensive and expensive and involves writing a detailed specification, and that’s very demanding especially if you want to start looking at outcomes based specification. But it is useful, especially if you are risk averse.”

The advantages of not going to competitive tender lie in the opportunity to collaborate on the service specification. Sobanja explains: “Calling for expressions of interest and working up your specification in detail with your provider is a much more collaborative process and is better for developing long-term relationships.”

The dust is still settling on this ruling. Whether it gives other CCGs the confidence to follow where NEW Devon has led-only time will tell.