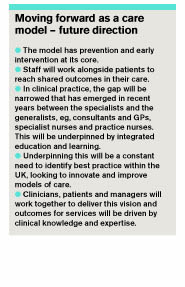 In January 2015, NHS England invited organisations to apply to become vanguard sites for the new care models programme, which was to become one of the first steps towards delivering the Five Year Forward View.
NHS West Cheshire Clinical Commissioning Group (CCG) – in partnership with local providers – was selected as one of the areas to develop a new model of care and became part of a bidding process to secure funding to support their new model of care, the West Cheshire Way (WCW). Once funding was secured, the project could move forward and the CCG  could formally launch the new care model.
The vanguards were selected following a rigorous process involving workshops and the engagement of key partners and patient representative groups. Each vanguard site was to take a lead on the development of new care models, which will act as blueprints for the NHS moving forward and provide new thinking to the rest of the health and care system.
The Five Year Forward View challenged West Cheshire CCG to think differently about how the needs of the local community were currently being met, and to better utilise technology to improve health outcomes such as more patient-led self-care management.
The long-term aim is to build partnerships with patients rather than providing single, unconnected episodes of care. This includes providing more care out-of-hospital and integrating services around a patient’s needs.
West Cheshire Way has been designed to adapt to the increased demand of an ageing population with more complex needs, as well as more people with long-term conditions – which are key challenges facing West Cheshire – while working within a financially restrictive framework.

Teamwork
During 2014/15, West Cheshire had already been working with its GP practices to encourage them to explore what care would look like in the future. Practices began working more closely together as a group with their community care team, which is made up of community nurses, therapists, care co-ordinators, social workers and well-being co-ordinators. By working more closely some clusters, eg, Princeway – that covers Frodsham and Helsby – was able to improve the offer for palliative patients and other complex housebound patients.
This was used as the foundation for the pitch at the vanguard bid event in March 2015, using patient stories to show the benefits of community team working. For example, a 96-year-old patient fell at home, she had no acute medical need but lived alone and so there were risks attached. Admission to hospital would have been the easiest solution, but the patient was reluctant to leave her home. With a phone call to the team, care was ‘wrapped around her’ to such an extent that – with the added support of her neighbours – she was able to stay at home in the knowledge that she was being looked after and with all the appropriate care.
Working together as a cluster, the Princeway team is seen as a mini multi-specialty community provider covering a population of 25,000. The vanguard ambition is to roll out this model across the whole West Cheshire population of 250,000.When practices work together in clusters it allows for a wider skill mix to support those patients who have a higher degree of complexity and long-term care needs.
A key theme that runs through the care model is for patients and/or their carers to embrace the concept of self-care so that they can learn to manage their condition, which in turn, will place less of a strain on resources. This would involve clinicians and the local population working together to build an understanding of self-care and incorporate it into clinical pathways.
This care model is ambitious in its delivery, but it will transform the way that existing care is delivered, with the long-term aim being to prevent ill health, improve wellbeing and more proactive in anticipating patient needs through the programme of self-care and making both patients and carers partners in their health and wellbeing.
At its core are the GP practice teams who work together as clusters (with three to four practices per cluster) supported by their integrated team, and working in partnership with clinicians and others to support people to stay well in the community.
West Cheshire has a successful track record of bidding for and using innovative care design. For example, it has a community pilot site for integrated care for Altogether Better for Cheshire (one of four national whole place community budget pilot areas testing new, radical and local approaches to delivering public services) and in developing and implementing the Cheshire Care Record (patient information on a database that can be viewed by any clinician providing care to the patient), both of which have acted as building blocks for the new care model approach.

Thinking long-term
The West Cheshire Way is a tactical model, because it looks at the population of West Cheshire from a cradle-to-grave approach and at each stage of a person’s lifecycle, seeks to ‘step in’ with a series of early intervention measures. For example, we will introduce a shared obesity prevention approach called the daily mile challenge, where all pupils from nursery to year seven will be encouraged to walk or run a mile a day. If our learning is replicated from schools elsewhere in the country, this will reduce the number of children who are obese when leaving primary school and lead to a reduction in the number of obese adults with long-term conditions. Early intervention through the WCW model provides a catalyst – by using a chain of events – which will result long-term in the healthiest outcome for that child.
If this new transformational plan did not go ahead, West Cheshire would have to deliver savings of approximately £20 to £27 million each year, for the next five years, and so this became the key driver for the West Cheshire Way model.
The WCW will work together in Chester, Ellesmere Port and the surrounding rural areas and is a partnership between the West Cheshire CCG, Primary Care Cheshire, Countess of Chester Hospital NHS Trust, Cheshire and Wirral Partnership NHS Trust and Cheshire West, and Chester Council to respond to the challenges outlined. Local patient, voluntary and community groups are involved too, including Healthwatch Cheshire West.