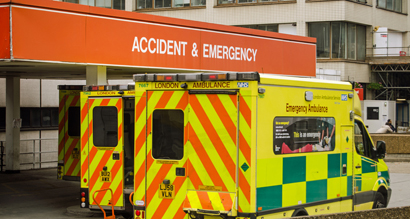 The head of NHS England has reportedly been told that the buck stops with him over the service’s performance this winter.

According to newspaper The Guardian, Prime Minister Theresa May apparently told Simon Stevens that he would be ‘accountable’ for how well the NHS copes with the expected challenging pressures this winter.

The head of NHS England has reportedly been told that the buck stops with him over the service’s performance this winter.

According to newspaper The Guardian, Prime Minister Theresa May apparently told Simon Stevens that he would be ‘accountable’ for how well the NHS copes with the expected challenging pressures this winter.

Details of the conversation at Downing Street in September were leaked to The Guardian. An unnamed source allegedly told the newspaper that Mrs May said Mr Stevens would be personally ‘responsible and accountable’ for preventing a winter crisis this year.

According to the newspaper, the source claimed: ‘There was a long pause, as the enormity of this sunk in. He had to accept it because she was making it clear that he was in charge this winter.’

Healthcare Leader contacted both NHS England and the Department of Health (DH) for comment. The DH said it did not have a comment on the private meeting.

Mr Stevens' supporters are said to be concerned that he is being set up as a ‘fall guy’ if the NHS faces unmanageable pressures thanks to flu and other winter illnesses.

Mr Stevens has warned that the NHS should brace itself for a ‘heavy flu season’ that could exacerbate pressures on the service.

NHS England has pumped £237m into its largest ever flu vaccination programme for vulnerable people.

This year, it has extended the free vaccines to healthcare workers in care homes to help protect residents from contracting flu.

The alleged conversation comes after Mr Stevens made a frank speech at the NHS Providers conference warning about deterioration in the service unless more money is forthcoming.

He said the promises made by Brexiteers over the majority the ‘£350 million a week’ coming to the NHS if the UK left the EU should be honoured.

Mr Stevens painted a bleak picture of care if funding for the NHS nosedived in 2018 and 2019.

He warned: ‘On the current budget, far from growing the number of nurses and other frontline staff, in many parts of the country next year hospitals, community health services and GPs are more likely to be retrenching and retreating.

'That’s an extra million people on the waiting list. One in ten of us waiting for an operation. The highest number ever.’