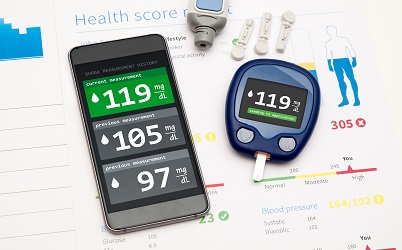 The North West London Collaboration of Clinical Commissioning Groups (CCGs), together with Imperial College Health Partners offered 400 patients the possibility to manage their diabetes through four different apps, as part of a pilot launched in 2017.

Among previous achievements, the North West London Collaboration of CCGs is proud of having increased the number of people diagnosed with non-diabetic hyperglycaemia (NDH) from 2,000 to 60,000.

The North West London Collaboration of Clinical Commissioning Groups (CCGs), together with Imperial College Health Partners offered 400 patients the possibility to manage their diabetes through four different apps, as part of a pilot launched in 2017.

Among previous achievements, the North West London Collaboration of CCGs is proud of having increased the number of people diagnosed with non-diabetic hyperglycaemia (NDH) from 2,000 to 60,000.

We currently have 129,000 people in North West (NW) London who are living with or have been diagnosed with Type 2 diabetes.

On average, they spend around three hours per year with a healthcare professional and manage their condition themselves for the remaining 8,757 hours.

We decided to provide personalised support and information to patients that are unable to or choose not to attend education classes to help control their diabetes. We appreciate that everyone learns differently and smartphones are increasingly becoming a tool used to manage lives.

We recognised that there are many apps and digital programmes already available to support people with diabetes to self-care, so we decided to pilot three apps (Changing Health, OurPath, and Oviva) in NW London and use results and feedback from people with Type 2 diabetes to decide if we should roll them out across our eight boroughs.

Three apps were selected for the pilot that took place over four months in 2017, following a competitive application process. The pilot aimed to evaluate how the apps support people with Type 2 diabetes to manage their condition and/or improve their current level of wellbeing.

All CCGs in NW London were given the opportunity to participate in the pilot. In total, 18 GP practices were selected for the pilot, with one app to be trialled per practice.

GPs were asked to recommend the app being trialled in their practice to 38 patients (per practice) which resulted in more than 400 patients taking part in the pilot across NW London.

• Patients lost on average two to three kilograms of weight

• 118 patients participating provided details of their medication, of those 20% were able to stop taking the diabetes medication metformin during the trial

• Patient and clinician feedback was generally positive and overall pilot results supported the wider use of smartphone apps for delivering structured diabetes education.

Building on the success of the pilot, the North West London CCGs are currently working on an ‘information hub’ for both patients and clinicians to find information and training courses on diabetes.

The pilot evaluation identified a need for additional languages to be available in the apps, in order to reflect the diversity of the population in NW London.

As a result, all of the three app providers are currently developing their services into different languages.

Patients reported that the apps were easy to use. They felt more motivated, better informed about food and enjoyed the tips and advice on hand and at their own convenience.

The apps provided structured diabetes education classes for patients who historically don’t engage with diabetes education and are ‘hard to reach’ using traditional methods of care. Therefore, Type 2 diabetes patients using the apps no longer miss out on personalised support and information to help manage their condition.

A North West London Collaborative of CCGs spokesperson said: ‘We are very pleased with the initial findings and are now planning to roll out the apps across NW London to support patients with Type 2 diabetes to manage their condition. We would also like to highlight the significantly improved clinical outcomes and the benefits received by patients.

‘We are happy to share our learning and evaluation with other CCGs across the UK.’