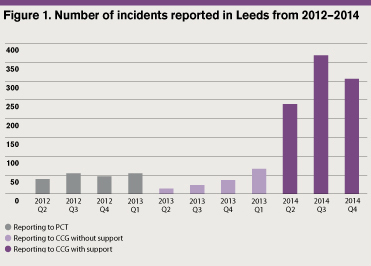 Nationally, primary care providers contribute only a fraction of the patient safety incident reports received by the National reporting and learning system (NRLS). Many Leeds practices regularly review patient safety incidents and identify ways to protect patients from harm. Founder and former president of the Institute for Healthcare Improvement, Don Berwick’s review of patient safety in the NHS1 highlights how these localised lessons can improve the safety of patients if they are shared with and adopted by others more quickly.
In 2010 the Leeds primary care trust (PCT) made the Datix web incident reporting module available to all general practices in the city to record, manage and analyse the incidents they discovered. Contractual levers were used to underpin the use of Datix.
Clinical commissioning groups (CCGs) support and develop their member practices to improve the quality of care they provide. The management of patient safety incidents, including the reporting and creating a significant event audit of such occasions, is one method of improving quality. Practices are supported by the CCGs’ medicines management teams that cascade the shared learning from medication safety incidents. This contrasts to the relationship between practices and the PCT or NHS England, which is contractual and associated with performance management.
In 2014/15 there was a financial incentive of around £0.6m for the CCGs in Leeds to increase the numbers of medication safety incident reports submitted to NRLS by its providers and primary care contractors.
The Leeds CCGs agreed to work with their 111 member GP practices to increase the number and quality of patient safety incident reports and significant event audits that were shared with the CCG.
The programme was delivered by the medicines optimisation teams, primary care development teams and the governance team for the CCGs, which was hosted by Leeds West CCG.
The CCGs nominated a senior pharmacist with experience of managing patient safety, to provide clinical leadership for the programme. The pharmacist was a human factors practitioner (patient safety expert) and was given dedicated time to provide input.
The GP prescribing lead for Leeds South & East CCG was an advocate for incident reporting and the head of governance was a nurse and a human factors practitioner. Together, they provided a strong clinical leadership for the programme.


Training
Training was made available to each practice: instruction on how to use Datix and knowledge-based training on the importance and effect of incident management and clinical human factors theory and practice.
Training materials were designed in-house and modified continuously to reflect the changes to practice and the frequently asked questions.
The training was delivered in various ways to meet the practices’ needs:


Feedback
It is recognised that people do not report incidents if they do not receive feedback that this is a useful activity.
Practices were provided with quarterly feedback on themes, trends and lessons learned. The feedback included detailed analysis of the categories of incidents with the greatest numbers.
Included in the feedback was the number of incident reports by the CCGs and by the practices for benchmarking purposes. Benchmarking was used throughout the programme to highlight the practices with the most reports as “champions of safety”.
Thematic review and analysis of significant event audits uploaded to Datix gave the opportunity to publish, on a monthly basis, case studies from which practices could extract and apply safer practice. These were consistently formatted and the link between the use of Datix and the provision of lessons in case studies was continuously made explicit.
Leeds has a well-established infrastructure to share medicines related incident reports and lessons across the providers in the health economy. This was promoted to show practices that their reports were passed on to affect change in other organisations.

Managing quality
The CCGs agreed that because the primary objective was to increase the number of reports completed by practices it would not simultaneously attempt to increase the quality of the reports.

Incentives
Each CCG incorporated a reporting target into a locally managed quality improvement or engagement scheme. Achievement of the target was a prerequisite for the practices to receive a payment under the scheme. The exact nature of the scheme and level of payment varies across the city.

Results
The level of reporting achieved by Leeds PCT was consistent throughout 2012/13.
There was a sharp decline in reporting in the first quarter of 2013/14 as NHS England and the CCGs came into place. Incident reporting increased throughout 2013/14 but did not achieve the annual level seen in the preceding year.
There was a steep rise in reporting in the first quarter of 2014/15 that continued into the second quarter of the year. Reporting levels in Q2 2014/15 saw an 800% increase on the same quarter in the previous year (see Figure 1 showing previous data).

The number of incident reports in the first three quarters of 2014/15 were 2.4 times the number of reports submitted in the whole of the preceding two years.
GP practices also uploaded 250 significant event audits onto the Datix system.
To make our patients safer we must understand what is going wrong. The National Patient Safety Agency guidance, Seven Steps to Patient Safety for Primary Care advises that patient safety incident reporting is fundamental in learning what is contributing to patient harm.2
In 2011 general practices in England reported 4,154 patient safety incidents to the NRLS. By comparison acute/general hospitals reported 899,766 incidents, more than 200 times as many.3
We are very pleased with the success of the programme to improve the number of incident reports submitted to the CCG by general practices in Leeds.
There were several elements to the programme that played a key part in its success:

Our next steps are to focus on improving the quality of the reports and the associated significant event audit and to develop plans for sustaining the levels of reporting.