‘My motivation is not being in charge; it’s getting the right thing done’ 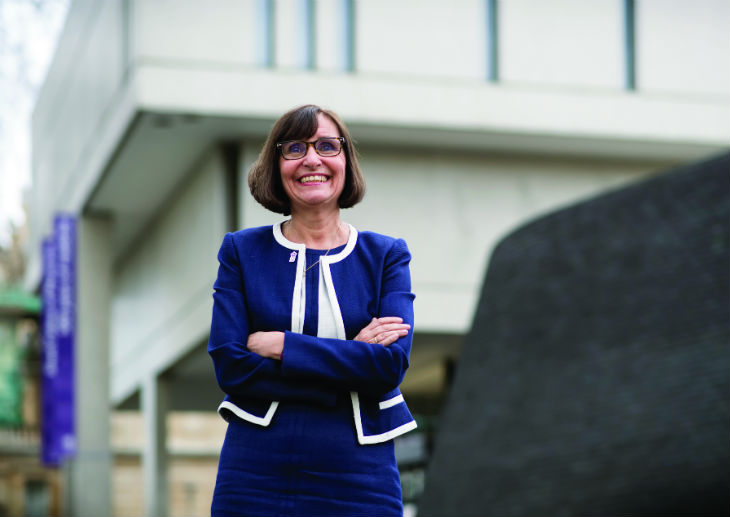 It’s a bit like learning how to swim; you get a feel for it,’ says Professor Jane Dacre, former president of the Royal College of Physicians (RCP).

We’re talking about leadership, just as she finished her tenure in the college’s top job. Professor Dacre, who was made a dame in the Queen’s Birthday Honours earlier this year and is a consultant physician and rheumatologist, says her four-year term as RCP president has taught her a great deal about how to be effective as a leader.

‘I’ve learned an enormous amount about getting things done and one of the most important things is your approach to others,’ she says.

‘If you’re too adversarial, people shut you out. If you’re too nice, people ignore you. What you have to be is effective, which is somewhere in the middle, and that means you sometimes need to be strong and at other times terribly nice – and you have to be able to move seamlessly from one to the other,’ she adds.

Ms Dacre, a professor of medical education whose previous roles include medical director of Membership of the Royal Colleges of Physicians of the United Kingdom (MRCPUK) exam and a member of the General Medical Council, says finding herself in leadership roles was not so much a deliberate strategy as a result of her professional approach.

‘I never said “I want to be president of a royal medical college,” but I did think “there’s something that needs fixing, and I want to be the one who fixes it”.

My motivation is not to be in charge, it’s to get the right thing done,’ she says. Professor Dacre says that when she graduated from University College London (UCL) Medical School in 1980, she didn’t necessarily set out to be in leadership roles, so it’s something she feels she has honed along the way.

‘It sort of evolved; I got into positions where I had to lead and wasn’t sure what was expected. So I did some research and got myself onto a few courses,’ she explains.

‘Recognising the hard work of others’

The self-study and courses have, she says, been hugely helpful in providing her with leadership tools. ‘They taught me the rationale for why some things worked and other things didn’t, and also gave me strategies to use.’

Professor Dacre has a longstanding interest in medical education, and was involved in the development of the exam systems at St Bartholomews Medical College, the Royal College of Anaesthetists and the MRCPUK. She also served as director of UCL Medical School for three years, between 2011 and 2014.

This background in education has been an asset in many environments – including the RCP. ‘I’ve come up through clinical education and through that I have developed skills that are quite transferable. Managing a classroom or lecture theatre, for instance, is very similar to managing a meeting, a rotundtable or a working party,’ she says.

The key to leading well, she adds, is recognising the hard work and ideas of others and being conscious of not stealing the limelight. ‘I try to make sure I never forget that you can’t do anything on your own and that everything you achieve is largely the work of someone else, or of a group of other people,’ she says.

‘I’ve seen people’s good ideas be sucked in by leaders. I don’t think they necessarily do it on purpose; I think they genuinely believe those ideas were their own. They’ve forgotten to recognise where the ideas came from and to me that’s really important – to acknowledge when someone’s come up with something influential.’

One of the elements Professor Dacre felt ‘needed fixing’ when she took the four-year RCP appointment was the gender balance, or lack thereof, among ‘the people at the top of the organisation, which didn’t reflect the workforce’.

She was only the third female president in the college’s 500-year history (it was founded in 1518) and was keenly aware that women were underrepresented in senior roles at the RCP. But, ‘to use a medical model, it was only the symptom’.

To make a diagnosis, she ‘got data, created an equality and inclusivity task and finish group, which came up with recommendations that were accepted by the council and the board of trustees’.

One of the equality initiatives she spearheaded was ensuring there were official processes for new appointments
– something she’s found to be crucial in ensuring that a greater number of women make it to the top.

‘There are some things that are well known in terms of improving equality and I’ve introduced quite a lot of those,’ she says. ‘For example, having proper HR processes and ensuring that you have succession planning and routine turnover after a period of years in elected positions on boards or committees.’

Any bias against women is, Professor Dacre believes, typically not deliberate. It’s more a case of opting for the familiar and choosing a candidate who resembles the people making the hiring decision – who have typically been white and male. ‘I think it’s unconscious bias,’ she says. ‘I don’t think it’s evil intent at all; it’s just lack of awareness.’

Having a clear structure for application processes, including ensuring there are ‘both men and women, and also minority ethnic representation,’ helps combat discrimination, conscious or otherwise. It’s also important, she says, to ‘make sure that roles are advertised, rather than just saying “oh he’s a good chap, let’s put him into the job”.’

Shine a light on the issue’

Since application processes became more formalised and the college made a point of focusing on equality there has, Professor Dacre says, ‘been a very significant change in the number of women stepping forward for college roles – because they know we want to attract, appoint and elect people like them’.

She explains that she has had ‘an interest in gender, leadership and women in medicine for about 10 years’. This – in
combination with her excellent reputation as a physician, leader and educator – is likely to be a key factor in her recent appointment by former health and social care secretary Jeremy Hunt to lead a review of the gender pay gap in the NHS.

The difference in pay between men and women in the health service is 15% for doctors and 23% for the workforce as a whole, considerably higher than the median UK pay gap of 9.8%. Professor Dacre adds that she also ‘happened to be with Mr Hunt when the NHS gender pay gap story hit the headlines’ earlier this year. ‘We were discussing it, so I think it was in leading the review’.

The review is expected to be completed by the end of the year. While it is too early to predict its conclusions, Professor Dacre hopes it will ‘shine a light on the issue; identify the contributing factors and work at how to mitigate them’.

The review is, Professor Dacre explains, using ‘a complex mathematical formula to look at explainable differences in pay by gender over lifetimes’. There are a number of such explainable reasons – ranging from the time out of work many women take to have and raise children, to active discrimination.

However, there is also, she points out, ‘a percentage of difference that is unexplained if you look at it forensically. I think shining a light on that will help people recognise that there are still unconscious biases in the system that need to be addressed.

One prediction she is able to make about the conclusions of the review is that it will feature ‘recommendations for policy that might help to change things’. Effecting change is also what she hopes her legacy at the RCP will be, although she does not use a term as grandiose as ‘legacy’ herself.

‘I had a series of personal aims when I started, including equality and diversity, and I’ve made inroads into all of them, which is lovely,’ she adds. ‘I’m delighted that my successor, Dr Andrew Goddard, who took over as president at the end ofSeptember, shares the same sort of values.

I feel as if I’ve ploughed the field and now someone else can grow the crop.’ She also leaves a very tangible physical
legacy from her RCP tenure – RCP North, a branch of the college that is currently under construction in Liverpool.

She explains how that came about: ‘I wanted a big splash to celebrate our 500th anniversary. So I thought, “what
problems does the college need to address”? I realised that one of them was that the college was perceived as too London centric, so if we had another building in the north, we would be reaching out.’ The new northern headquarters will cost £35m and will open in 2020.

While it’s clear that Professor Dacre has relished her time as RCP president, she expresses no regrets that her term has come to an end.

‘I think four years has been just right,’ she says. ‘If it was shorter, it would limit your achievements. Any longer and it stretches you too much. And the things you haven’t been able to achieve, someone else can come in and hopefully sort out.’