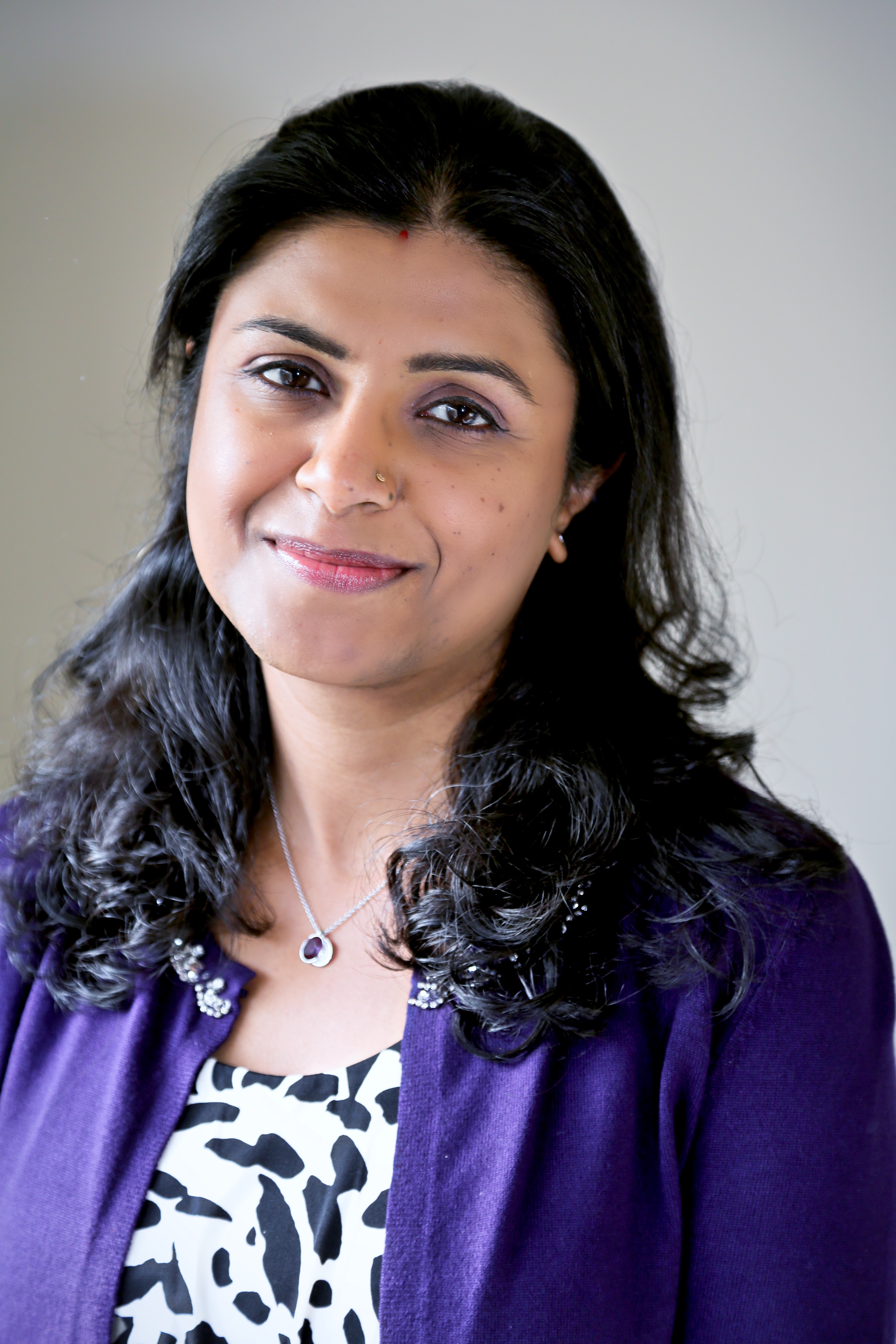 But she wasn’t going to be put off by teachers telling her she was ‘wasting a space’ on her university application form by applying to medical school: ‘Don’t be silly, Jyoti, nobody from this school has ever been accepted’.

Even once she got to Charing Cross Medical School, the battles weren’t over. ‘I got married – to a man who was subsequently violent,’ she says.

Leaving him wasn’t the end. ‘He’d stand outside my house and say, “come down, you bitch, or I’ll burn your flat down”.’ She graduated in the middle of a divorce and a court case for attempted murder.  Ms Shah says her parents were ‘beside themselves’ with worry. ‘What would the community say, how would my younger siblings be married? There’s a stigma attached to the elder daughter being divorced.’

But Ms Shah was determined: ‘The best way I could think of to stand up to this man was to succeed. That was a driver in itself – he wasn’t going to get the better of me.’

And she’s done just that, as a consultant surgeon, an author of four books and  63 articles in peer-reviewed studies – and a campaigner for equality. In an interview on Radio 4’s Today programme in 2015 she warned that the operating theatre is ‘still a hostile environment for women’.

Executives at her trust were not impressed. ‘I think they misunderstood.  I didn’t go up and say Burton Foundation Trust was a nightmare; I went up to say this is the national problem. The figures speak for themselves.’

Indeed, fewer than 11% of consultant surgeons are female and only 8% in Ms Shah’s specialty, urology. ‘I pointed out that I’m the only female surgeon in our hospital.’ And that’s not uncommon.

There were some who accused her of exaggerating. But she says that while there may be less overt sexism than in previous decades, ‘banter’ matters.

‘I have a colleague who still says “I’d better not say that or Jyoti might have  a hissy fit”. Or women get comments  like “that time of the month, is it”? Or: “she’ll get you with her killer heels”, and little things that you couldn’t really take someone to task over. I don’t think it’s  just in medicine or surgery. I think it is prevalent in other walks of society.’ It needs to be challenged, she adds. ‘If we laugh  it off like a lot of women do, it becomes acceptable.’

It’s not all low level. Ms Shah recounts one case of a junior who discovered her boss had used her computer to send an amorous email to another consultant. The message appeared to come from the trainee. She was ‘so utterly devastated she left the profession’.

Clearly that is outrageous. But in general, what effect does the low number of female consultants have? It doesn’t make sense that 90% of people who would make great surgeons are men: ‘There have got to be excellent, highly qualified women out there, or women who have the potential to be highly qualified excellent surgeons at consultant level.’

But why does she campaign about misogyny, and not also racism? It’s down to personal experience. There have only been ‘a few’ racist comments. ‘I was scrubbing up once in theatre with a white, male consultant. He said “Jyoti, however hard you wash your hands, you’ll never be this colour”.’ It was shocking, but she didn’t complain, concerned that it would affect her career – it was in the 90s. ‘I don’t think you hear comments like that now,’ she says.

But we are still a long way from equality. So what needs to happen? Ms Shah says: ‘We need to get it out there to say, you can be a woman in this job.’ The impression that it’s impossible to combine surgery with having a family is not true, she insists. Surgeons aren’t unique in working long hours – so do nurses and shopworkers and many others, she points out. And while responsibility for childcare does tend to fall more heavily on women, ‘there are plenty of men who are now saying they want to spend more time at home’.

She says there is a problem with hours and the ‘go for a drink in the pub after five’ culture. ‘If you have to pick up a child or you’re part time, you miss that networking opportunity where a lot of decisions for your department might be had.’

That’s where the Medical Women’s Federation (MWF), and organisations like Women in Surgery at the Royal College of Surgeons (RCS) come in, with opportunities to find sponsors and advocates. A lot of networking ‘that men do so easily in the pub, in the golf club, in bars, gets done at things like MWF’.  There are still men who make snide comments about it. When Ms Shah recently went to a MWF conference a colleague said: ‘I’m going to set up an organisation just for men.’ She replied: ‘You have, 217 years ago – it’s called the RCS and it’s only just letting us in.’

A wider group of women would mean female leaders would not feel obliged to fall into the trap of ‘adopting more of the negative male qualities of being dominant and aggressive’ as some do, she says.

Gender balance is vital across the top levels of the NHS, not just in surgery: ‘Women bring a different perspective at boards and committees, otherwise if it’s all men there is a lack of balance.’

Boards need a wider kind of input – including from patients, she argues. It was her neighbour who pointed out that it is a mile from the hospital car park to the cardiac unit. He needs a mobility scooter to make the journey. ‘We should have him sitting on a committee where we make decisions about where the car parks or the cardiac unit is.’

Being patient centred isn’t just a concept to Ms Shah. Thinking about men’s reluctance to come forward for prostate testing, she decided to go out and get them. She brought a pop-up clinic into Burton Albion FC’s stadium. Together with her colleague Sarah Minns, a Macmillan urology advanced nurse practitioner, they did two days of screening. Patients were referred to the hospital and 13 cancers were detected that could have been missed. Another session in March picked up even more.

Ms Shah sees the patients referred to hospital as extras – so her existing caseload isn’t being held up. The local Rotary Club funded consumables such as gloves.  Ms Shah and Sarah worked without pay.

Yet even now, like many women, she suffers from imposter syndrome –the phenomenon where successful people doubt their abilities and fear being found out. When I asked for an interview, Ms Shah says she asked her husband: ‘She wants to interview me for being a leader. Why would she want to do that?’

It’s something that psychological research shows is more common among women. Ms Shah cites examples of one woman who was approached about becoming medical director. She wasn’t confident enough – instead, she is now studying for management qualifications. Meanwhile men ‘apply for jobs even if they don’t fulfil or have all the required attributes on the person specification’.

Leadership is about far more than just confidence in your own abilities, she believes. As commissioning editor of the RCS Bulletin, she had the idea of interviewing leaders outside the NHS. ‘We’re reinventing the wheel – surely there are great leaders in other professions and they must have ideas we can embrace.’

She spoke to people such as former England rugby coach Sir Clive Woodward, fashion designer Amanda Wakeley and retired admiral Sir Trevor Soar. The admiral told her in the navy leadership is not bolted on, as she believes happens in the medical profession, but assessed and developed throughout a sailor’s career.

So what did her interviewees agree was the key? It’s about having a vision, listening to the front line, and communication. Sir Ian Blair, former commissioner of the Metropolitan police, would turn up unannounced at police stations to see what was really going on. Sir Trevor made a similar point – he’d visit without warning and speak, ‘not to the next in command, but the lowest ranking person, because that’s where he got the real truth’.

All her interviewees had a vision for where they wanted to take their organisations but understood the importance of getting buy-in from their staff – not just issuing orders. ‘They were taking people with them, rather than using the authoritative, “you will do this, you will do that” style.’

This hasn’t always been the approach of the NHS – which many would say is characterised by top-down management. But it is something its leaders, of all kinds, need to learn.

Kaye McIntosh is a freelance journalist