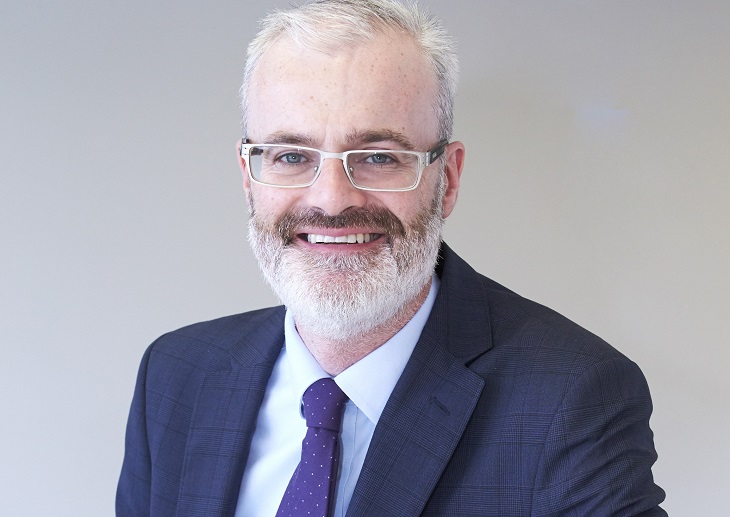 ‘As soon as I finished my A-levels, my mum brought home an application form that said they were looking for porters. It was the best thing I ever did,’ he says.

After he finished university, it was clear to him that he wanted to stay in the NHS long-term. He worked as a community service volunteer care assistant in Lancashire and later started applying for management training schemes in the NHS.

Mr Mortimer has had a very dynamic career after officially joining the NHS as a regional trainee in North Staffordshire in 1993.

He covered a variety of HR and general manager roles in different hospitals, before becoming the chief executive of NHS Employers, in November 2014.

His remit is supporting NHS employers on a number of priorities, such as pay, recruitment or employment practice, to help them ensure every NHS employee is treated fairly.

There is no denying that black and minority ethnic (BME) staff working in the NHS face more barriers than their white colleagues, with only 7% of the whole BME workforce moving into leadership roles.

‘I think that the biggest challenge we are facing at the moment is race equality. I do think that there is a real waste of talent,’ Mr Mortimer says.

Hindering the career progression of BME people in the NHS means we are not properly using our talent, and this makes our services and patients ‘poorer’, he believes.

He adds: ‘What we know is that every single employer in the NHS – be it a provider organisation or one of the national organisations – offers a poorer experience to its BME staff compared with its white workforce.

‘I think the problem is understood and accepted now but there are whole varieties of things that organisations need to do, actions they need to take.’

Race is not the only challenge NHS employers need to grapple with at the moment.

Gender inequality in the NHS means women’s progression is stagnant. The first report by NHS England on gender pay, published in March, showed that a disproportionate percentage of men (85%) occupy national clinical directors, while 80% of women are in the NHS’s lowest pay quartile.

A joint report by NHS Improvement and NHS Employers also published in March showed that only 42.6% of women sit on boards across trusts and 39.5% on CCG boards.

‘The NHS does better than many private sector organisations in terms of gender diversity at the top of its organisation but we know that we don’t have enough female non-executive directors, female finance directors and female medical directors,’ Mr Mortimer says.

‘I think that boards, chairs and chief executives need to commit themselves to having a greater balance between genders at their boards, particularly in those three key roles, where we see more men than women.’

A way to overcome these issues would include rethinking the shortlisting process, Mr Mortimer suggests.

‘Are we making sure that women get the opportunity to progress to be medical directors or finance directors?’ he asks.

Jobs in the health and social care sectors represent 13% of all jobs in the country, as Health Education England (HEE) showed in its draft workforce strategy.

Despite this, the organisation said that ‘we have not had a national strategy for recruiting, training and supporting staff for over two decades’, and it is now finalising a workforce strategy that will be published later this year.

But following Prime Minister Theresa May’s announcement of an extra £20.5bn in real terms to the NHS by 2023/24, Mr Mortimer believes the time is now propitious to work on the actions that ‘are going to make a difference to our workforce over 10 years.’

He says: ‘I think there is a temptation to believe that there is going to be one radical solution to our workforce challenges. My sense and the sense of NHS Employers’ members is that there is not. What we have to do is focus on the bundle of things that are going to make the biggest difference to most people.’

While waiting for HEE’s workforce strategy, there are several actions that employers can take to support staff retention.

Employers need to take responsibility for retaining their staff, Mr Mortimer believes, and he thinks this can be done through four actions in particular.

‘The first thing that makes the biggest difference is looking after new starters and really focusing on their care and support.

‘The third thing is we [employers] need to be more flexible, not our workforce. What our people tell us they need is predictability. Some people need greater predictability in their working patterns to be able to live their life, and that isn’t necessarily in function of age, or if you have children for example. Sometimes, people just need it and we still have work to do before we can say that we can deliver it.

‘The fourth thing that will help with retention is about older workers and making it as straightforward as possible for them to access their pension and return to work, to either their previous role or a different one,’ he says.

A recent report by the Cavendish Coalition, of which Mr Mortimer is co-chair, found that the haemorrhaging of nurses from the health sector could be further exacerbated by Brexit, with as many as 10,000 additional nurses’ vacancies, adding to the present 41,722 vacant roles.

Mr Mortimer says: ‘We need a system after we leave the EU which allows us, where we need, to hire colleagues outside of our workforce. We need to have a system as a country that allows us to properly staff our social care services but we are still unclear about what government’s policy is going to land on that.

‘We need a migration system after Brexit that is fit for purpose.’

In particular, Mr Mortimer says we will need to be able to bring in social care workers, particularly those covering ‘domiciliary care assistance type of roles’.

Around 390,000 social care workers left the sector in the past year, according to a report published in September by Skills for Care, the body for workforce development in adult social care in England.

A Migration Advisory Committee report on EEA migration, also published in September, suggested the Government should scrap the cap on the number of high-skilled migrants from the EU while limiting access for lower-skilled labour.

But Mr Mortimer believes that a future migration policy has to be a ‘needs based system’, and at present there is a great need for social care workforce.

‘The terminology of the labour market and economists is that those roles are unskilled – they are not. We need skilled, talented, caring people to be looking after our elders in particular in their own homes, nursing homes, and care homes.

‘The technical language of unskilled doesn’t capture what we need these people to do. Whilst we grow our domestic workforce, we do need access to our colleagues in social care and they need to be able to access [these roles in the UK].

‘These won’t be people with degrees, with professional registrations, but they will be people who are vital to caring for our community.’

Danny Mortimer is chief executive of NHS Employers and co-chair of the Cavendish Coalition.