How our CCG relieved NHS pressure through rugby 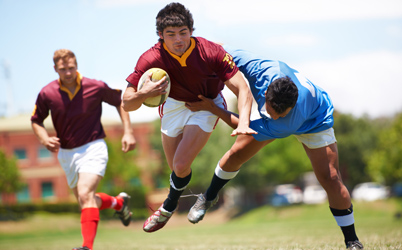 NHS services in and around the borough of Halton are constantly under pressure from service users, especially A&E departments and local GPs.

There is no dedicated A&E department in Halton and residents tend to use the A&E services at Warrington and Halton Hospitals NHS Foundation Trust or St Helens and Knowsley Teaching Hospitals NHS Trust.

Waiting times were high and a proportion of patients were identified of not needing emergency care at the time of attendance. Other services were available in the borough but not being utilised.

We had already invested in two UCCs, one in Runcorn and one in Widnes. In June 2017, we commissioned the Widnes Vikings, as they had a large following of local residents and social media audience base, to help promote the use of UCCs. We launched the ‘Beat the Scrum’ campaign that sees the squad take part in about 20 short features, encouraging viewers to ‘beat the scrum at A&E’ by using alternatives to GP practices and A&E departments when they don’t necessarily need to attend.

Although we were publicising the UCCs via our social media networks and traditional media, such as local newspapers and radio, we knew that a large proportion of residents were still being missed.

The Widnes Vikings gave us a ready-made audience for us to give out local health information.

The campaign achieved huge awareness, receiving 100,000 video views on social media, with a total view time of almost 17 days. It also featured in a host of local and national media, including features in The Mirror, Sky Sports and BBC News. Initial feedback is that the videos have been viewed over 1.5 million times.

It coincided with an increased uptake of Halton’s UCCs, which provide a quicker and more cost-effective alternative to A&E for conditions that require urgent attention but aren’t serious or life-threatening.

The campaign also gained wider recognition and received the Rosa Parks Award at the Academy of Fabulous Stuff Awards, which celebrates best practice examples and innovative solutions within the NHS, in November 2017 as well as being awarded two honours at the Chartered Institute of Marketing Northern Awards.

Between June and November 2017, there was an 11% increase in attendances at Runcorn Urgent Care and a 4.7% increase in Widnes, compared to 2016.

On the back of the campaign, a new ground-breaking partnership deal has been struck with the Widnes Vikings. This includes a dedicated website, which will serve as a hub for the campaign as well as raising awareness of how people can lead healthier lifestyles and make the right choices when accessing NHS services.

The Beat the Scrum logo has also been included on the Widnes Vikings home and away kit, the first time an NHS initiative has been marketed this way.

Dave Sweeney, chief executive officer of Halton CCG, said: ‘We’re incredibly excited by the potential that the Beat the Scrum partnership has to reach, inspire and educate the public.

‘Halton CCG’s initial campaign with the club earlier this year achieved a phenomenal level of interest and engagement. We are thrilled to have the opportunity to scale up these efforts in partnership with our fellow NHS organisations to make a much bigger impact across the region.’