‘The NHS is amazing – we have to fight to save it’ 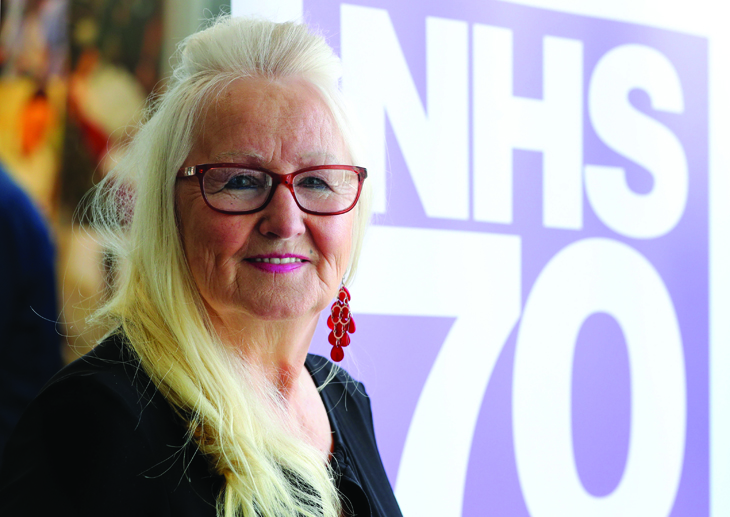 Deputy editor Angela Sharda speaks to Aneira Thomas about her remarkable life ‘as the first baby born on the NHS’ and what the health service now means to her.

Aneira Thomas’ mother said she had a ‘long, hard labour’ when giving birth to her daughter. During the delivery, the doctors and nurses urged

Aneira’s mother Edna to hold on. Why? Like every maternity ward in the UK 70 years ago, the hospital staff were watching the clock in anticipation of the first baby born on the NHS. So her mother held on a moment longer and gave birth one minute after midnight on 5 July 1948.

The doctors and nurses asked Edna to name her daughter Aneira, the female form of Aneurin, after NHS founder Aneurin Bevan (or Nye as he was commonly known), and Edna liked the idea.

Aneira, the youngest of seven children, says her mother would say: ‘This baby was going to be different – the chosen one.’

When she was little her mother would introduce her as ‘Nye, my national health baby.’ Although as a child Aneira did not understand the significance of being the first baby born on the NHS, she now says the health service has ‘changed people’s lives.’

Although her mother lived until she was 95, Aneira often wishes she could have asked her more questions about her life – and what she would have named her if she wasn’t born on 5 July 1948.

What does being the first baby born on the NHS mean to you?

It’s major, I feel proud. It’s a great privilege to have been named after the man who created the NHS. The NHS meant equality for people – before that it was only the privileged few who could afford healthcare. The NHS allowed people to feel equal, it made a difference.

What connection do you feel to Nye Bevan?

In Cardiff his statue stands proudly in Queen Street, and when I go to there I feel emotional. One morning I was travelling to London at 5am and the coach was going past Cardiff Castle and I could see an outline of him through the mist and it made me cry.

I look at the statue and think, ‘Like my father, Nye’s father was a miner who saw the suffering in the valleys in South Wales’. He was a true visionary – someone who doesn’t just think about changing lives, but does something about it.

What needs to change in the NHS?

I think the front-line staff should be making decisions. They know what makes the NHS tick. When I worked in the NHS, there were matrons on the wards and when they said jump you’d say ‘how high?’.

You were wary of them but they were fantastic at running the wards.

You were a mental health nurse for 28 years. What inspired you to join the NHS?

Two of my sisters were nurses and my father had two sisters who were ward matrons, one in Cardiff and one in Gloucester. So there were many nurses in the family.

I passed the 11-plus, as one of only three out of 30 students, and I remember running home on a summer’s day to tell my mother. My teacher had said to let my mother know that I had ‘passed unconditionally’, although as a child I didn’t know what that meant.

When I got home she was waiting at the door because she knew we would get our results that day. When I told her, she said, ‘Oh, there we are darling, you can be a nurse like your sisters now’.

Back then, with the way finances were, my mother couldn’t afford to send me to university. We were encouraged to be caregivers, I don’t regret that. I was measured up for my uniform – and it continued from there.

How would you describe your experience as a mental health nurse?

It was challenging but rewarding. I think you are born to be a nurse and you take the rough with the smooth. It’s not always easy, but you never give up.

For the last 10 years of my working life, I was at a place in London called Housing for Women, run by women, for women. It is for people who have been in prison, a mental health hospital or arrived through self-referrals.

What needs to be done to improve the lives of those with mental health issues?

A day in the life of someone who is suffering is a day too long, isn’t it? I obviously wish more money could be put into mental health because it’s been lacking for years and years.

There are more mental health problems now because of the pressures of the world. The way people live now there’s lot of strain, day in day out.

What changes did you see during your time in the health service?

Things started changing in the 1990s. People in mental hospitals had become institutionalised, but then they introduced [the 1990 NHS and Community Care Act], bringing people out of hospitals and into the community.

Before that some people had been put in a mental hospital and forgotten about but then they were given another chance in life.

What are the biggest challenges for the NHS today?

I think there is a lot of misuse as well, a lot of waste. I was talking to a lady one day and she said: ‘I work in a pharmacy and my job is to destroy all the unused drugs, and drugs cost a lot of money.’ The NHS is not a bottomless pit, and I think we do take it for granted.

What experience have you had of the NHS as a patient?

My children have had neurosurgery and I am in awe of the NHS and the fantastic work staff do. Where would we be without them? It’s the difference between life and death.

Yes, I hope it continues. I think we should promote a healthier way of life. This should be taught in schools because healthier people are fitter and more productive. This would cut NHS costs for a start. There needs to be a lot more education on, for example, the dangers of smoking. Health education should be promoted a lot more.

What should the NHS be focusing on to make it stronger for the next 70 years?

Planning would be crucial. I heard [health and social care secretary] Jeremy Hunt talking about the winter crisis. He said there would be a 10-year plan for the crisis, from now on, and I thought, ‘Well, the crisis has been going for quite a while, so the planning should have started a long time ago, not now.’

When Nye created the NHS it took five years of fighting and planning because he met a lot of opposition. But the plan was that people would live longer and healthier lives.

I get angry when I hear people saying that we are living longer and depleting the health service. Well, that was the plan in the beginning – why shouldn’t people live longer?

What are your concerns for the NHS in the future?

The NHS is amazing – it’s simply fantastic how far it has come. We have to fight to save it. I am a bit concerned about this Government and the way it’s changing things in the NHS – it makes me very tearful.

There are so many managers in the NHS and some are on six-figure salaries, and then there are nurses who are having to fight to get the pay cap removed – that is just wrong. They know nurses are dedicated and will work even if there is a strike. I feel the Government takes advantage of that.

How does the NHS make you feel?

I feel safe because of the NHS. Instead of taking it for granted we should be grateful that we have one.

A lot of young people have never heard of Nye Bevan and I think people do take the NHS for granted. It’s not their fault, but I think they should be made more aware of how precious it is.