Dr Liz O’Riordan: ‘We will all be patients ourselves one day’ 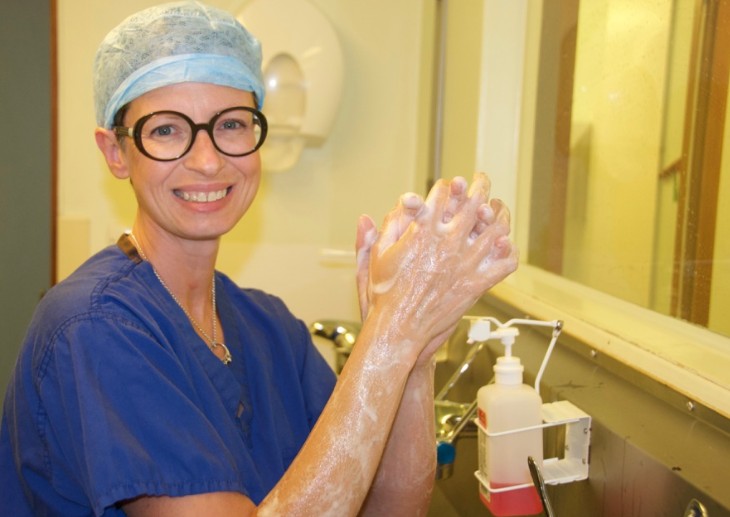 Liz O’Riordan had been a breast surgeon for 20 years, when she was diagnosed with stage three breast cancer in 2015.

Dr O’Riordan has now retired as a surgeon, but that doesn’t mean she isn’t busy. She has co-authored two books about cancer, speaks at conferences around the globe and has an award-winning blog that she started to help her come to terms with her cancer diagnosis.

She currently takes a course of drugs to prevent another recurrence and has a bisphosphonate infusion every six months to strengthen her bones, although these aren’t active treatments but more preventative measures.

‘It was hard for me being a patient and a doctor’

Dr O’Riordan says that the way she found out she had breast cancer was unusual.

‘I didn’t find out in a normal way. For most patients it goes like this: you have a lump, you go to the doctor, you have a scan, you have a biopsy and you wait for the results,’ she says.

But Dr O’Riordan says that when she had her ultrasound she could tell something was wrong.

‘I saw it [the lump] and I just knew it was cancer. I knew that I would have to ring my parents and tell them I had breast cancer.’

Being a professional in the field does not, she says, prepare you for the full impact of being diagnosed.

‘Doctors tell you what’s going to happen but they don’t tell you how to cope. Instead, it was patients like Kate Granger, who was behind the “Hello my name is” campaign, who helped me. She was one of my chemotherapy buddies,’ Dr O’Riordan says.

‘The NHS was fantastic – I cannot fault it’

Dr O’Riordan was treated by a surgeon who was also a mentor and a friend. Meanwhile, her husband was locum chief executive after being ‘medical director’ of West Suffolk Hospital in Bury St Edmunds, where she received some of her cancer treatment.

He’s still a consultant general surgeon and the chief clinical information officer at the hospital, where Dr O’Riordan also works as a learning from deaths medical reviewer one day a week.

‘A good thing about being on the other side is that I now know from experience that patients are getting really good care,’ she says.

After her 2015 diagnosis and treatment, she returned to work and realised she should change the way she broke bad news to cancer patients.

‘You realise little words take on a whole different meaning. I used to say “you’re lucky we caught it early”. In fact, no-one is lucky to get cancer. I was more aware of the words I used [after my experience],’ she says.

Dr O’Riordan says that once you become a consultant in the NHS, nobody gives you feedback on the way you break bad news anymore. However, she believes this would be beneficial.

‘I was lucky to find out in a clinic, behind closed doors. But one person in four find out they have cancer in A&E. And some patients find out on hospital wards, behind a curtain,’ she says.

She adds that privacy is a major issue for patients who have just been diagnosed. ‘You can’t ring anyone because everyone in the ward is going to hear you. It’s really hard,’ she adds.

Dr O’Riordan believes the NHS needs to encourage patients to exercise while they are able to. She is a triathlete, and has seen first hand the positive difference exercise can make after a cancer diagnosis. This led her to set up a website with colleagues, cancerfit.me, to encourage patients with cancer to get fit and active.

‘Exercise should be [prescribed] to treat cancer. There are personal trainers and physiotherapists in hospitals for people to go to,’ she says.

Dr O’Riordan says she wasn’t athletic as a child and that it all began when she met her husband. One year later she did the Ride100 in London and a year after that, she took part in the London olympic distance triathlon.

She has raised more than £2,750 for cancer charities through cycling and walking.

Dr O’Riordan says a major problem when doctors become patients is that ‘you know far too much and you want staff to treat you as normal’. Another issue is that doctors aren’t taught how to look after colleagues who are patients as colleagues assume their knowledge is greater than it actually is.

‘It’s amazing how doctors [often] get really bad care because people don’t tell them what they need to know. If we complain, people think it’s because we are doctors,’ she says.

Dr O’Riordan believes there is a need to improve the quality of care that doctors receive when they are diagnosed with a disease. ‘Doctors need support too – they are just people who are scared.’

‘Every cancer is important’

The long-term plan outlines that by 2028, the NHS will diagnose 75% of cancers at stage 1 or 2. In real terms, this means an additional 55,000 people a year would survive for at least five years after diagnosis.

However, Dr O’Riordan acknowledges that there are flaws in the system.

‘There are problems with screening and the more people who are diagnosed sooner, the better it will be,’ she says adding that she would love to see a greater focus on cancer at every stage; not just at stage 1 and 2.

‘I had friends who died of metatastatic breast cancer,’ she says. I would love to see equal focus on every stage of cancer and not just picking it up early.’

She says that decision-makers in the NHS need to make patient care more of a priority.

‘As hard as it is, we need to listen to what patients tell us. Get the patient’s input – because what you think the patient needs isn’t necessarily what they actually need. Recognise the patient’s voice – it’s as important as the doctor’s.’

Dr O’Riordan says that the NHS makes mistakes, like any other organisations, but that the time has come to address the situation differently.

‘I would love to go back to the NHS with what I know now and say you don’t need to spend a lot of money. Instead, think outside the box to make changes.’

Last year, Dr O’Riordan was the inspiration for a statue in the foyer of West Suffolk Hospital, where she was treated. It shows her after her mastectomy, with a cycling helmet and a triathlon medal covering her chest.

She went to her final radiotherapy session at Addenbrooke’s, where she was also treated for cancer, dressed as the superhero Mrs Incredible, and was told she had been chosen as the model for the statue. ‘It’s very surreal,’ she says.

Dr O’Riordan adds that she doesn’t think she has done ‘anything amazing’ but does say that her blog was not only a way of coping for her and understanding that her cancer was real, but has also allowed her to help others in similar situations.

‘Although my career was taken away from me by cancer, I am still able to help people and that means the world to me. Just getting an email from someone saying, “thank you” makes me realise that [what I’m doing] is worth doing. But I’m just doing my job ­– well my new job.’

Dr O’Riordan says that the reason anybody goes into healthcare is to improve the quality of care and make a difference for those with ill-health.

‘We will all be patients ourselves one day,’ she says.