The Commissioning Framework for Biological Medicines, published in September 2017, sparked an NHS-wide drive towards using biosimilars – drugs that are similar in terms of quality, safety and efficacy to an original licensed biological product but are often available at a much lower price to the NHS. However, switching patients to biosimilars presents significant challenges, not least in adding to the resource demands on specialist teams already under considerable pressure.

Uptake of biosimilars is reported nationally within the Medicines Optimisation Dashboard provided by NHS England and NHS Improvement. In autumn 2018 the dashboard indicated that the West Midlands region as a whole was behind other regions in switching from branded adalimumab to the available biosimilar agent. Adalimumab is the most commonly prescribed biologic drug in the NHS, and therefore the highest spend drug used in our hospitals.

Switching patients to biosimilars is resource hungry. Effective engagement is essential, not only with patients but also with their clinicians to ensure everyone is clear about benefits and implications. Patients have to be assessed for their eligibility and supported through the switching process if they consent to take part.

It was clear that lack of resources was one of the major barriers to switching patients onto biosimilars. This led our team to develop an ‘in-reach pharmacist’ model as part of our medicines optimisation service for local CCGs. The model was the first of its kind and would base a CSU pharmacy resource onsite within local Trusts, dedicated to delivering the majority of the work associated with switching patients to biosimilars.

South Warwickshire CCG agreed to fund a pilot project, using the in-reach approach, in October 2018. At that time, less than 10% of the potential Quality, Innovation, Productivity and Prevention (QIPP) savings attributed to biosimilars had been achieved for the CCG and there was scope to improve this significantly before the financial year end. Key specialities using this drug were rheumatology, gastroenterology and dermatology. We prioritised rheumatology since this is where the greatest support was required.

Putting the foundations in place

Before the model could be put forward, careful consideration was given to the governance requirements. Once the pilot had been agreed, we put together a detailed Memorandum of Understanding to cover the objectives, roles, responsibilities and governance arrangements.

We recruited an independent prescriber with extensive clinical experience to provide the in-reach service. Prior to any patient contact, the pharmacist completed all the mandatory training required by both Arden & GEM and the local Trust. This included detailed arrangements for access to patient records and patient confidentiality, giving the Trust complete confidence that the pharmacist would be fully compliant with their processes when operating on the hospital’s behalf.

We brought together the key stakeholders at the Trust, including the lead rheumatology consultant and medicines optimisation pharmacist, to discuss and agree the approach and specialist training for the in-reach pharmacist with the rheumatology team.

This collaborative approach was critical in developing shared objectives and building confidence in the model.

Over a six-week period, the in-reach pharmacist focused on identifying patients with rheumatoid arthritis who would be suitable for adalimumab biosimilars. Letters were sent to those currently undergoing adalimumab treatment to explain what biosimilars are, why they are used within the NHS and why the switch would be beneficial. We included a dedicated email address and phone number for patients to raise queries. Where needed, patients were also offered consultations with their consultant.

The pharmacist identified 151 eligible patients, of which 131 agreed to switch to the biosimilar agent, resulting in savings of £681,000 in 2019/20. The 87% switch rate exceeds the 80% target set by NHS England and NHS Improvement.

Throughout the project the in-reach pharmacist continued to act as a conduit, increasing collaboration between the CCG, Trust and clinical specialists to build and maintain positive working relationships between all stakeholders. This included ensuring high cost drugs prior approval forms were up to date and complete, integrating with the rheumatology team, building strong relationships with the homecare team at Warwick Hospital and attending monthly multidisciplinary team meetings.

Following the successful pilot, the CCG agreed to fund a second phase focusing on switching patients from rituximab to a biosimilar. Rituximab is typically given every six to nine months when there is a flare up in a patient’s condition and is administered via intravenous (IV) infusion in hospital, which presented additional challenges.

All patients had to be treated at the main hospital site in Warwick under the close supervision of a healthcare professional experienced in IV infusions, in an environment where full resuscitation facilities were immediately available should any adverse reactions occur. The first two infusions needed to be administered at a slower rate, with patients being monitored before and after the treatment, requiring them to spend up to eight hours in the unit compared to the normal four hours for rituximab infusions.

The in-reach pharmacist worked closely with the hospital’s day unit to negotiate capacity alongside the unit’s existing schedule of administering chemotherapy and biological medicines. All eligible patients received a letter and telephone consultation with the in-reach pharmacist to explain the proposed change, answer any queries and ensure patients were happy with the switch. Consultation outcomes were logged in the patient notes and day unit booking-in system so that all consultants and nursing staff were aware of any change.

Of those eligible, 73% of patients contacted agreeing to the switch. As a result, savings of £94,000 were realised in 2019/20, based on each patient receiving two doses per year.

This project made a significant contribution to South Warwickshire CCG’s medicines optimisation QIPP savings plan, with total savings of £775,000 delivered in 2019/20. The CCG is now looking at further opportunities using this model.

In a recent review, the rheumatology department at South Warwickshire NHS Foundation Trust confirmed that the speciality is spending less than budgeted, due in large part to the reduction in spend on high cost drugs through this in-reach programme.

The approach was presented at an STP Pharmacy integration workshop, to share the lessons learned and encourage wider use of this approach. This was well received, and neighbouring Trusts and CCGs are keen to adopt this model. 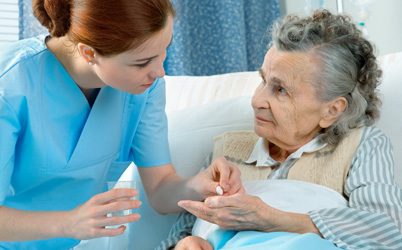 How our trust tackled medicines wastage by 70%

University Hospitals of Leicester (UHL) NHS Trust saw an opportunity to use robotics to revolutionise...

Prescriptions of  homeopathy, herbal treatments and other low value items will be scrapped in a...