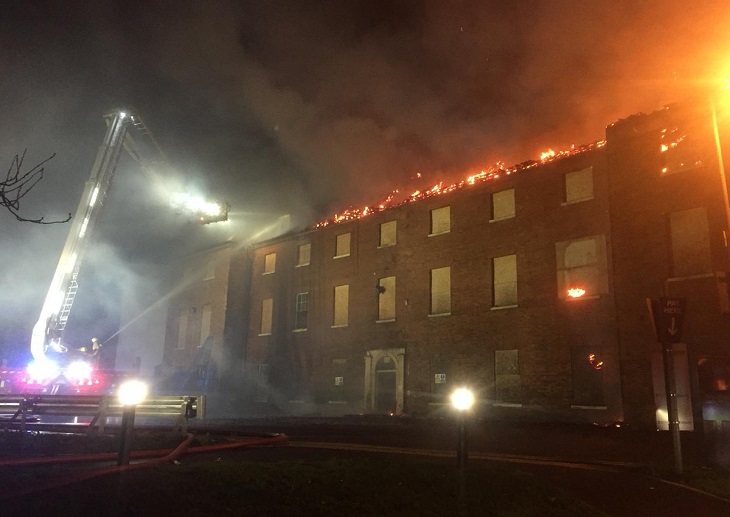 A fire has left a derelict NHS building in Bedfordshire partly destroyed.

The building is disused and there were no patients or staff on the premises when the fire, which at one point saw around 60 firefighters work to put it out, started.

Investigations are ongoing but Bedfordshire police said it suspects arson.

Bedford Hospital NHS Trust said in a statement that the building is not part of the hospital and it is owned by NHS Property Services (NHS PS).

‘However, all Moorfields appointments scheduled for today at the Enhanced Services Centre (ESC) in Bedford Health Village will now take place at the South Wing site.

‘If Moorfields appointments cannot take place at the ESC next week, Bedford Hospital will look to open additional clinic space at Gilbert Hitchcock House. Any affected patients will be contacted.’

Earlier this morning Bedford Fire and Rescue said in a statement on Twitter that the cause of the fire is subject to investigation.

Crews are still on scene at Bedford Health Village, Kimbolton Road, Bedford. We now have 2 appliances, 2 aerial platforms & 2 water carriers on scene while crews dampen down & ensure the building is stable. The road is now open. The cause of the fire is subject to investigation. pic.twitter.com/Ulb1AxNgo5

Later, Bedfordshire Police issued a statement in which they said they are suspecting arson and are appealing for witnesses.

Superintendent Jim Lunn said: ‘We take all reports of arson very seriously, particularly as the fire was so close to operational hospital buildings, and we are continuing to investigate the circumstances of this incident. At the moment we are treating this as deliberate.’

‘Our priority now is to ensure that our partner organisations are able to access adjoining buildings safely.’

This is not the first time that a NHS PS-owned building has caught fire.

Weybridge Community Hospital in Surrey, also owned by NHS PS, was left destroyed by a fire in July 2017.

The incident encouraged NHS PS to carry out a review of around 3,500 NHS buildings it owns, which is expected to be completed by spring this year.