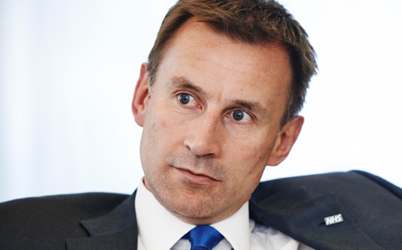 The move follows a High Court ruling to uphold the General Medical Council’s (GMC) decision to strike off  junior doctor Hadiza Bawa-Garba following the death of a six-year-old boy from sepsis at Leicester Royal Infirmary.

She was handed a 24-month suspended sentence by Nottingham Crown Court in 2015 for gross negligence manslaughter.

Mr Hunt’s review follows protests by doctors who are concerned that the risk of prosecution makes them more cautious and more likely to ‘practice defensive medicine’.

He said healthcare professionals were worried  ‘that we may not be giving a voice to doctors and other clinicians who want the freedom to be able to learn from mistakes.’

His clinical adviser Professor Sir Norman Williams will carry out a rapid review into the use of gross negligence manslaughter in healthcare.

Mr Hunt said: ‘Working with senior lawyers, Sir Norman will review how we ensure the vital role of reflective learning, openness and transparency is protected so that mistakes are learned from and not covered up, how we ensure that there is clarity about where the line is drawn between gross negligence manslaughter and ordinary human error in medical practice so that doctors and other health professionals know where they stand in respect of criminal liability or professional misconduct, and any lessons that need to be learned by the General Medical Council and other professional regulators.’

The review will also involve the Justice Secretary David Gauke, the Professional Standards Authority for Health  and Social Care and the devolved UK administrations.

It will report back  by the end of April and is designed to address concerns about keeping ‘an open and transparent culture where health professionals are encouraged to speak up and learn from their mistakes, ’ a Department of Health and Social Care spokeswoman said.

DHSC said it was inevitable that some mistakes are made in a high-pressured busy environment like the NHS, but recent events had also raised wider questions about how gross negligence manslaughter cases are investigated and the role of doctors’ personal reflections.

Mr Hunt said: ‘The only way we can reduce mistakes in the NHS is to learn from every single one, and the tragic case of Dr. Bawa-Garba raises many important questions about how the health system supports staff to be open and transparent when things go wrong.’